The descriptions of the tag is relevant: these alarm boxes are being phased out, in most places in the US they have no use. if they exist, most likely they're there for historic reasons.

I do not understand why the boxes have to be on public land. The exact same box, used to signal a fire to a fire department, would get a different tag when placed on private land? Additionally, it may be hard to find out whether the box will call the fire department or will only raise an alarm in the local fire prevention/monitoring system, e.g. of the building. —Dieterdreist (talk) 13:28, 4 November 2018 (UTC)

argument in favor of restricting scope to public land

I can see how one would think they are the same. To a first respondent, they have few important differences that may not be visible to non-experts. One, they are maintained by the cities to resist major events. Two, they are accessible to the public, outside of (collapsed?) buildings. Three, the alarms in buildings are expected to be accessible *first* by the people in the building: first respondents are unlikely to be the first ones to reach the alarms in a condo or a bank before the people in there do (or the automatic signal goes off).

You can add alarms in private buildings but I don't see how that information would be valuable. In San Francisco, private condos, public buildings and larger buildings are mandated to have fire alarms connected to the fire department anyway so you'd basically add redundant information. Not sure about other places in the world, I don't object to using the tag outside of its scope but that'd be a stretch.

I agree there is a significant difference from being on the street or inside a building, and making this distinction on the main level, as you propose, to me makes sense. I would expect to have a specific tag name in this case, emergency=fire_alarm_box is too generic and would likely be used for any fire alarm box. Maybe emergency = public_fire_alarm (or _box)? or emergency=street_fire_alarm_box
While this a unwieldy, you can be much more sure they would be only used for what you intended.—Dieterdreist (talk) 20:38, 4 November 2018 (UTC)

I see how this can be confusing to non-native English speakers. "fire alarm box" is already a well defined term in English, with its own wikipedia page, too. The alarms in private buildings, in English are called simply "fire alarm". I suggest we pay attention to the translations instead of inventing a new term for something that is already well defined in English. Smaffulli (talk)

Thank you for clarifying, I was misled by some wrong hits in the imagery search like https://www.alamy.com/stock-photo-fire-alarm-box-break-glass-3708018.html —Dieterdreist (talk) 22:39, 4 November 2018 (UTC) 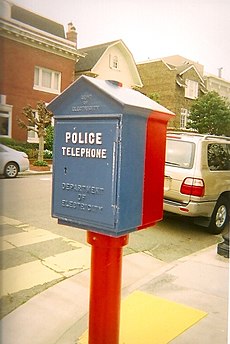 Some fire alarm boxes in San Francisco have police call boxes attached to them. How should such combination boxes be tagged? – Minh Nguyễn 💬 00:39, 30 November 2018 (UTC)

maybe as emergency=phone? Will they just ring an alarm or can you talk to the police through them? —Dieterdreist (talk) 07:50, 30 November 2018 (UTC)

The police call boxes contain telephones that ring up the police without sounding an alarm. However, they're locked and can only be opened by police officers and other city workers who have a key. [1][2][3] emergency=fire_alarm_box;phone on a single node would be a possibility, except that an access=permit tag would apply only to the phone, while access=yes would apply to the fire_alarm_box. – Minh Nguyễn 💬 09:25, 30 November 2018 (UTC)

The combo is less useful for a general-purpose map if the device can be operated only by police and some city workers. It can be useful information for some though so I suggest we recommend to use two separate nodes, one for the fire alarm and one for the police. Smaffulli (talk)