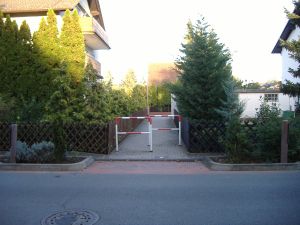 "This tag should not be used for areas of land within a larger area of land already designated for public use, such as a path through a park." Why not? What's the point of this rule? And how should those be mapped instead? --Dieterdreist 20:46, 7 October 2009 (UTC)

thanks for the removal. While I agree with the general meaning of "landuse" I think that's not the meaning in OSM, or we should bring in a new tag (like landcover). I also agree that the path will be part of the park, so excluding it is not necessary (thanks to OSM-history in this particular example it is also not important as park is "leisure" and therefore doesn't collide with landuse). I would simply draw the path outline and tag it landuse=highway within another landuse polygon. -- Dieterdreist 20:37, 26 March 2010 (UTC)

"The actual road or path may or may not have already been built." - I would at least expect a suggestion of a subtag how to tag the difference but actually don't like the idea at all, that a planned road should have the same "main tag" than a designed / planned but not yet (and maybe never ever) built one. --Dieterdreist 20:46, 7 October 2009 (UTC)

it could be similar like for road constructions (and all other constructions): landuse=construction, construction=highway. But I like this proposal, (I also would like to have something for bridges like landuse=bridge. Or maybe it is better to map bridges as landuse=highway (and layer=1), landuse=pedestrian? (I would actually differentiate between highway and pedestrian areas/sidewalks, and not only rely on overlaying highway-ways, as it facilitates usage for rendering enormously). For planned roads I would prefer another way to tag the planned landuse, but keep the current landuse as landuse-tag (there could be relations for planned roads, which contain the areas or maybe mostly just some linear ways). Besides this issue I like your proposal. -- Dieterdreist 20:30, 26 March 2010 (UTC)

differentiate between roads and pedestrian areas

The easiest way could be to tag just landuse=highway and landuse=pedestrian (or way?), where way would be all ways where motorized vehicle are not allowed. This would really ease differentiated rendering of those. Or they could via relation be tied to highway-ways. This makes it more complex to edit, but it saves us from putting name, highway-class, access-restrictions, surface, and all other stuff in duplicates to the areas. -- Dieterdreist 20:30, 26 March 2010 (UTC)

Why should we map the legal status of the land?

Are we not trying to overload the database with information that (a) is normally not relevant, (b) creates a maintenance nightmare. I don't think we should map legal status aspects that are defined in some documents in some office, but are not visible on the ground. Let me more specific. In my area (Veneto, Italy) many roads on the map are not exact and need small adjustments. In addition there are new roundabouts that are sprouting like mushrooms everywhere. Every time I encounter such a situation, I have not only to adjust the road, but also the landuse polygons adjacent to the roads. If we introduce also now landuse=highway I also need to adjust (micromap) the borders of the highway landuse. Not to speak from the problem that I have no way of knowing where the legal borders really are (is the ditch along the road legally part of the road or of the adjacent private dwelling? Is the sidewalk legally part of the road? ...) I would need to consult the official documents to know. I prefer to map the facts and leave it at that. --voschix 15:09, 17 January 2012 (UTC)