One might also want to add a future key to note the color of the plastic skin on the wires (if any.)

Some colors tell drug users "don't bother stealing this cable, as inside in not costly copper, but just aluminum.". 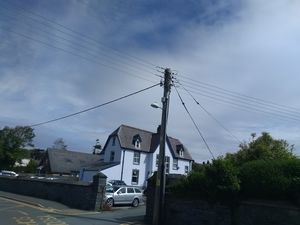 A minor power line/cable for 240V local distribution in the UK.

The pole has a minor power line (top-left of image to pole to centre-right of image) of 5 uninsulated conductors. Normally the lowest conductor is neutral, next are three phases and the fifth conductor (if present) is a street lighting feed.

The pole also has an Aerial Bundled Cable (centre-left of image to pole) consisting of an uninsulated neutral and four insulated cores, all encased in outer insulation.

Also visible on the pole are two guy wires (pole to bottom-right of image), a vertical cable leading underground, a street light and two mysterious boxes.

More information about both uninsulated conductors and ABC used for minor distribution in the UK can be seen in this video.

Definition vs actual use in database

The definition was changed in 2017 to add more details about possible voltage and use for distribution rather than whether the line is carried by small poles instead of large towers. However, from what I've seen, the pole vs tower distinction seems to still be the main criteria used by most mappers? The definition in the first section of the page is now really long and unnecessarily detailed. Can we tighten this up, and try to match the definition to actual use? See comments on this change: https://wiki.openstreetmap.org/w/index.php?title=Tag%3Apower%3Dminor_line&type=revision&diff=1536016&oldid=1268770 and compare power=line, power=cable, etc. --Jeisenbe (talk) 05:31, 10 December 2019 (UTC)

How was this voltage cut-off determined? "up to 45,000 volts (45 kV), or the highest known standard distribution voltage used in the country or region."

So the "up to 45 kV" number seems odd. The clear things are that 20 kV and under is definitely distribution, and 150 kV and up is definitely transmission, but values from 22 kv to 138 kv are sometimes considered a different class like "subtransmission" or "red de reparto". 66 kV to 90 kV is especially in this gray area. But if the real distinction between power=line and power=minor_line is poles vs towers this becomes less important. --Jeisenbe (talk) 05:47, 14 January 2020 (UTC)

I think in most countries the final voltage before end user 110-440V is 33kV or less, so it makes sense. I've never seen or heard of a substation transforming 45kV and above down to end user voltages. Only exception I would consider are lines for industrial use, usually 45-275kV. Gazer75 (talk) 06:18, 30 January 2020 (UTC)