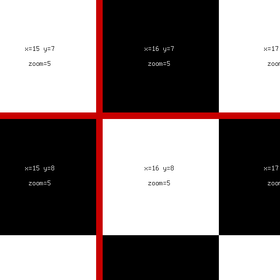 The checkerboard test pattern created by the test backend

The Tirex tile rendering system can use several rendering backends for creating the tiles. The Test backend is installed and configured along with the core of the system to get you up and running quickly. You can use it to test your Tirex system without need for Mapnik or a database.

The Test backend creates a checkerboard pattern, tiles are alternately black and white with a white and black tile number and zoom level written on them, respectively. In addition a red border is drawn around metatiles.

To test timings or timeouts you can configure the Test renderer to take a longer time when rendering tiles. The backend will just sleep the configured number of seconds to simulate rendering time. See Tirex/Config for how this is done.

If you want to implement your own backend, the code for the Test renderer is probably a good starting point. See backends/test and lib/Tirex/Backend/Test.pm in the source for the code.