The Tirex tile rendering system renders map tiles on the fly and caches them. It is very similar (and mostly backwards compatible) to the mod_tile/renderd system, but improves on it in many respects.

Tirex can work with several different rendering backends at the same time. Normally Mapnik is used for this, but a test backend (to test the system setup) and a WMS backend is also provided.

Tirex can handle several maps. Maps can have different styles and potentially use different data. In the most common case different maps are just different map.xml style files for the Mapnik renderer.

The tile size (256x256) is optimized for fast transfer on the web, it is not necessarily the best size for handling tiles on the tile server. Rendering many small tiles takes more time than rendering fewer bigger tiles and storing many small tiles in single files is inefficient because of the block size used by filesystems. Also a directory with many files in it will be slower than with fewer files.

This is solved by aggregating several tiles into a metatile. Typically 8x8 tiles make up one metatile, but this is configurable (although sizes other than 8x8 are not well tested) in Tirex. This is the same size as used in mod_tile/renderd systems. The tile server internally always "thinks" in metatiles. Access requests for tiles are converted into requests for metatiles. Metatiles are rendered and stored.

Metatiles are numbered just like tiles, a metatile number is always the same as the number of the top-left tile, in other words to get the metatile number you have to round the tile coordinates down to the neirest multiple of the metatile size (8). Tile (x=17 y=4) is metatile (x=16 y=0).

In the Tirex system metatiles are represented by Tirex::Metatile objects. In addition to the x- and y-coordinates and the zoom level, a metatile also needs the map name.

If a metatile should be rendered, a job must be created for it. The job contains at least the information about the metatile and the priority. It can also contain additional information such as the expire time, the source of the request and the time it took to render the job (once it is rendered).

In the Tirex system jobs are represented by Tirex::Job objects.

The master will keep track on where a job came from so that it can notify the source when the job is done.

The master keeps a prioritized queue of jobs. Every job that comes in will be placed on the queue. When there are free renderers, the master will take the first job from the queue and sends it to the renderer backend.

There is only one queue for all jobs, but it is prioritized. Priorities are positive integers, 1 is the highest priority. New jobs are added before the first job in the queue with a lower priority. Jobs are always taken from the front of the queue. So jobs will always be worked on based on their priority and age.

A job can have an expire time. If it comes up to be rendered and the expire time has passed, the job will not be rendered. This basically allows you to say: I have a metatile I want rendered because I might need it in the next few minutes. But if its not rendered in, say, 10 minutes, you needn't bother rendering it.

The queue is implemented in a way that its doesn't matter how many jobs there are in the queue. If you want to stick 1000 or 10000 jobs in the queue, thats ok.

It is your job as administrator of the system to decide which priorites to use for which kind of requests. Live requests coming in from a user should probably get a higher priority than batch requests to re-render old tiles. The Tirex system gives you the mechanisms needed, you have to decide which jobs get priority, how long they should stay on the queue etc.

A typical setup will have a bucket for live requests from the web (lets call it 'live') that works on priorities 1 to, say, 9. And then one or more buckets for background requests with lower priorities.

The master is the heart of the Tirex system. Its job is to work throught the queue in order and to dispatch jobs to be rendered when its their turn. The manager takes the configuration and the current system load into account when deciding which and how many tiles can be rendered.

The Tirex system consists of several processes that work together. Requests for the rendering of metatiles and other messages are passed between those processes through UDP or UNIX domain datagram sockets. Datagram sockets are used to make handling of many data sources easier in a non-blocking environment.

Messages always have the same, similar format: Fields are written as "key=value" pairs (no spaces allowed), one per line. A linefeed (LF, "\n") is used as a line ending, the software ignores an additial carriage return (CR, "\r") before the linefeed. Each message must have a "type" (for instance "type=metatile_request"). Requests will normally be answered by a reply with the same type and added "result" field. The result can either be positive ("result=ok") or negative ("result=error"). More descriptive error messages are also allowed, they always begin with "error_" ("type=error_unknown_message"). An additional error message for human consumption can be added in the "errmsg" field.

The following simplified diagram shows how a tile request from a web browser is handled by Tirex: 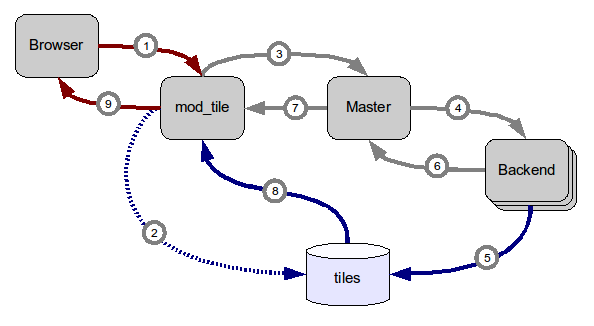