I will be going through each line systematically ensuring data is correct with no automatic edits. The project will be split into phases.

Phase 1: Loading Gauge, Route Availability and LOR codes. The LOR codes will allow easier identification for later tasks. I usually do these at the same time as they can be done be done in bulk and relatively quickly.

Phase 3: TIPLOCs to ensure all stations, junctions and stops have a TIPLOC code.

I use JSOM with only the rail network visible ensuring that no other nodes will be edited by accident. I also use overpass to find areas that are missing details.

Junction Maps - Raildar have junction maps that make it easier to locate junctions and LOR references.

I have noticed that some dual tracks are drawn using only one line; I will draw both tracks individually. UK trains tend to travel on the left so directions will be changed to match and if a track is bidirectional then oneway=no will be used.

NESA contains specific maximum speeds for locations within the network.

maxspeed - Speed as shown in NESA unless there is a dual speed limit (i.e. for tilting trains) in mph.

maxspeed:forward / maxspeed:backward - Some tracks are single but have different speeds for different directions.

ref:lor - Line of Route is the name of a strategic rail route.

Crossings will be tagged appropriately (Road/Path) and named.

A tough one. Junctions will be tagged on the node where the route splits, but only in a way the train would hit it once. I have put in a FOI request for all TIPLOCs with Latitudes and Longitudes as well. I also have an interview with Network Rail so hopefully I can find out exactly where they consider the junction location.

Key:railway=junction - Used to identify the junction at point of connection.

Key:ref:tiploc - TIPLOC code for the junction. 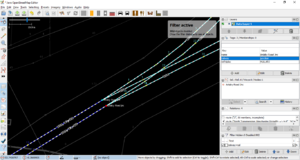 An example of rail junction tagging.

Loading gauge is a restrictions for specific freight trains to ensure that they do not hit bridges, tunnels or lineside equipment.

route_availability - A scale of 1-10 determining how much weight a track can hold.

Buffer stops / entrances will be added using the appropriate tags if I happen to be in the area. Also, if tracks are not aligned, I will make them more accurate to ensure line stays on track.