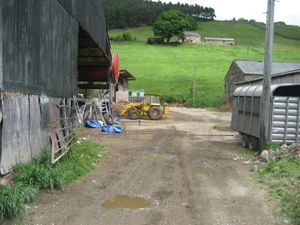 The third UK Quarterly Project of 2016 centres on Farms.

These are major landmarks in rural areas, often with sizeable buildings and usually named in OS StreetView. There are approx. 100,000 recipients of EU farm subsidies and taginfo with approx 14,000 farms mapped in OSM - so a long way to go. There are obvious problems with just armchair mapping - some farms seem to be little more than caravan storage, some have transformed into equestrian centres, small industrial parks or become just residential - so lots of encouragement for long walks or cycle rides in the country during our glorious English summer.

Jez says, "Part of my work involved producing environmental risk assessments for farms. They were a pain to plot because, in the UK, farms often grow over time through the purchase of nearby fields. A 'farm' can easily be a set of non-contiguous field polygons with or without a farmyard and farmhouse. I'm assuming that OSM isn't even going to attempt to plot this."

Ed Loach says, "I tend to put landuse=farmyard on the way around the farmyard and name=<name of farm>

I then put the address details on the farmhouse building, and just trace the other buildings and add a building tag (perhaps building=barn or building=stable if I know for certain, but often just building=yes).

Brian Prangle says, "Roughly what I do, but I separate the farmhouse by surrounding it with a landuse=residental way. I also usually tag buildings either agricultural or residential accordingly. Many can be listed buildings too so heritage tagging applies. I try to connect farmyards to the road network with a track or service road"

Daily report of landuse=farmyard features as measured by TagInfo UK.