UNMAPPEDPH is a project initiated by MapBeks in 2020 which aims to map out buildings and roads in the most unmapped communities and towns in the Philippines.

In a study conducted by Thinking Machines PH in 2020, it was identified that 24 towns in the Philippines do not have a single building footprint on OpenStreetMap[1]. This represents more than 100,00 families or approximately 500,000 individuals missing on the map.

So-called remote communities across the Philippines have been surviving and thriving over time, but they are not properly represented on OpenStreetMap. This project aims to initiate a mapping campaign that builds on and amplifies local capacities and interests in mapping for disaster preparedness.

A part of this project focuses to train LGBT organizations and individuals to learn how to contribute to OpenStreetMap. 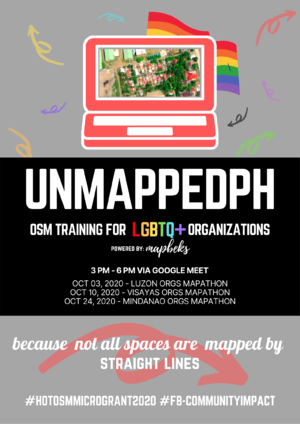 MapBeks launches its Project #UNMAPPEDPH in September 2020 which aims to capacitate LGBT organizations and individuals how to map on OpenStreetMap and to put the 24 most unmapped towns in the country on the map.

The 25 Most Unmapped Towns on OpenStreetMap in the Philippines

The validation process will be three-fold, namely: 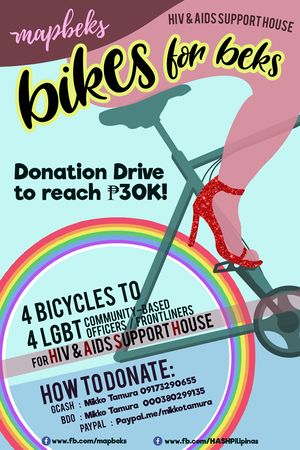 The #BikesForBeks Campaign under the #UNMAPPEDPH Project aims to encourage more people to map by providing donations to an identified charity based on the number of building footprints created using a specific changeset comment. Poster created by Raymund Añonuevo

As part of the #UNMAPPEDPH project, MapBeks initiated the Bikes for Beks Campaign which aims to encourage more LGBT and AIDS service organizations and individuals to participate in the mapping process. Each mapped building under a specific changeset comment would be equivalent to a specific amount donated for an identified charity.