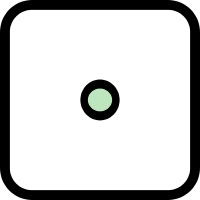 An untagged unconnected node is a node which is not part of any ways or relations (unconnected) and which does not have any tags on it. Since this cannot possibly represent anything, there is no reason for such a node to exist in the data.

If older than several days it is a bug, and should be deleted, although it can be worth trying to understand the reason it was created in the first place.

Where do empty nodes come from

Various Quality Assurance tools (error detection) will detect this type of bug (along with many other types).