From OpenStreetMap Wiki
< User:AkuAnakTimur
Jump to navigation Jump to search 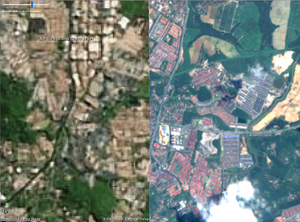 A comparison between Landsat 7 imagery and Sentinel 2 imagery, where a better resolution imagery is not available from Bing or Mapbox. Viewed through the JOSM editor. This is somewhere near Melaka.

I created Sentinel-2 colour composites using ImageMagick and Adobe Photoshop CS2 / CC 2015. "Finished" composites, although not that top notch quality to be honest, are hosted on MapWarper, where all those rectification process were automagically carried out as soon as it has finished crunching at least three specified coordinates. Go ahead and use them, to improve the OSM database. TMS URLs can be obtained from the Export tab.

In short, their resolution is up to Zoom 15 levels; which means it's kind of useful to trace major highways, waterways, significant landuse e.g. landuse=constructions; but (your own) GPS tracks can reveal more. So, like it or not, ground truth is still important. And also, at least it provides something colourful to work with monochrome satellite imagery. Before having fun tracing things, PLEASE ALIGN THE IMAGERY FIRST with respect to GPS tracks and/or Strava heat maps, as usual.

From time to time, I might remove some from this collection due to a better imagery is available and/or because you know, it is nice to give extra space for the other users of Mapwarper. I may keep a copy in TIFF format (mind you, it is a 300MB+ file); so you could upload it to your own self-hosted server, or even host them on Mapbox's server for example.

It's always a good practice to mention something like this in your changesets: source=Copernicus Sentinel data [year][1]. And, oh, also, it's permissible to use these as a tracing layer.

So far, I have only created composites for few select regions in the Peninsular region. Sabahan, Sarawakian or mappers from the rest of Malaysia may request a composite (or send me a PM), but it all depends on my free time.

One more thing, these imageries are best viewed in JOSM through my experience, even on a stable 512kbps connection.

Apparently I forgot to include the metadata