I use Linux and Windows machines and have a sysadmin background - currently focusing in usability and security of information systems. Own a Garmin GPSmap 60CSx unit that I used for a 6-month motorcycle trip from here to India - worked like a charm and the OSM maps were fantastic. I got the opportunity to contribute a little bit by uploading tracks from remote parts of India, but the 10,000 track points limit is killing me - given I don't like carrying a laptop around.

I'm preparing for a bicycle trip around Chile and trying to learn enough to make my time there as useful to OSM as possible, so if you have any tips on that please let me know!

I've edited /etc/udev/rules.d/51-garmin.rules to include:

This allows my regular (non-root) user to extract data from the GPS device. Without this line, only root can use gpsbabel to get data from the GPS. Regular users need to prefix any commands mentioned below by "sudo" and then supply their password.

Connecting the GPS to your computer

On connecting the GPS to the computer (laptop) with the USB cable and turning on the GPS, dmesg displays this line:

Transferring waypoints from the GPS to the computer

As a regular non-root user:

This creates the GPX file GPS_waypoints.gpx that contains all recorded waypoints (POIs).

This is a typical content of the GPS_waypoints.gpx file: (in this example it contains only three waypoints)

Transferring recorded tracks from the GPS to the computer

As a regular non-root user:

This creates the GPX file GPS_tracks.gpx that contains all tracks you have recorded with your GPS (like leaving breadcrumbs while you move).

This is a typical content of the GPS_tracks.gpx file: (example truncated for brevity)

It contains some headers and then just a list of all the different trackpoints recorded - each one between <trkpt> </trkpt> tags.

Once you have successfully uploaded a GPX trace to OSM via http://www.openstreetmap.org/trace/create and got the "[OpenStreetMap] GPX Import Success" email, you can click on the "edit" link from your trace's page (e.g. http://www.openstreetmap.org/edit?gpx=1078390 - but change the final number to the unique number of your uploaded trace) and then Potlatch 2 will start, showing you an editable version of the map, including aerial imagery, with your trace pre-loaded.

It is sometimes difficult to distinguish your trace from all the other OSM information already on the map. This is what the screen looks like for a second or two: 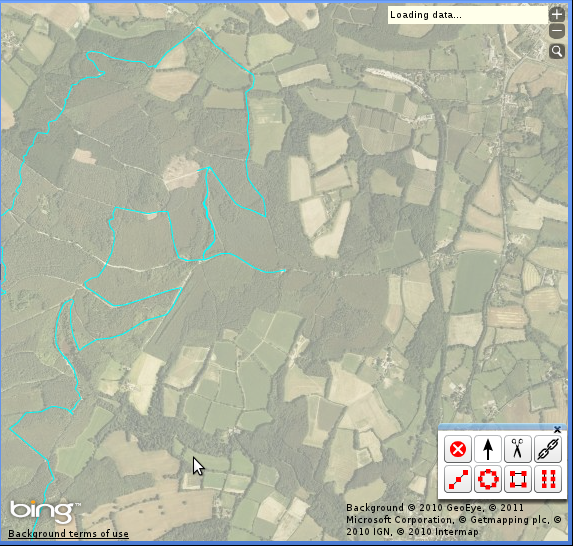 It is easy to see your trace (in light blue) on the aerial images.

The problem is that then all the other map information is loaded: 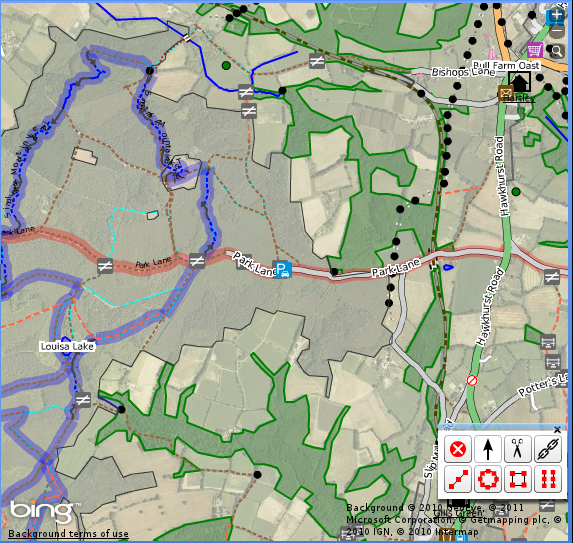 This makes it harder to see your trace - which you can still barely distinguish with the same light-blue/cyan color.

Zooming in makes the trace easier to edit.

Transferring routes from the computer to the GPS

To send the route "home_to_work.gpx" to the GPS:

Follow the instructions over at Upload_Waypoints for a quick'n'dirty method.

This method (using Potlatch for the final editing) has a number of limitations (labour intensive, not flexible enough, error prone etc), but it's simple. Plus, I haven't had the time/courage to figure out how JOSM works yet. Plus, I want to do all this while travelling so keeping the list of tools I need as slim as possible is a must. Potlatch will always be available on the OSM website, and will work from any Internet Cafe.

I want to add 50 new waypoints to OSM!

Great, me too! I went travelling for a few months and when I returned I had many Points of Interest that I wanted to add to the map, but didn't know how. I've found a (probably completely stupid) way of doing it:

I have a GPX file with no timestamps

Yes, it is rejected by OSM.

There is a reasonable way around it. (but also see next section for an automatic workaround)

On Windows, you need to install Python

On Linux, just do the last steps since python will probably already be installed:

On my Garmin GPSmap 60CSx it seems that the default setup is to save GPX files to the internal memory (not the removable SD card), which is very limited, hence the device tries to save space by discarding the timestamps and each track log is restricted to 500 points.

But, if setup to save recorded tracks onto the SD card (also known as "Data card"), it appears that timestamps are preserved and track logs can be as long as 10.000 points.

These GPX files (that the unit directly saves on the data card - you have little control of what and how is saved or named) are accepted by Openstreetmap with no hiccups.

To setup my device to do this I had to go to the "Track Log" page and then:

Note: See http://www.gpspassion.com/forumsen/topic.asp?TOPIC_ID=90924 for an explanation of what the "Log Track to Data Card" option does.

Say you have just uploaded a GPX with a long track - hundreds of trackpoints. You obviously have better things to do than re-drawing this manually, so you just want to select the entire track and convert it to a way. To do this:

Voila, now all trackpoints have been selected.

If you have created a GPX file that contains only <wpt> stanzas like this:

it can't be uploaded to OSM as is. You will need to add a header like this:

This is useful when you want to combine (connect) two segments of the same road, to form ONE road.

Note: This will not work (the button will be unavailable) if the two ways have overlapping points.

Assume you're editing with Potlatch 2 and you come to something like this: 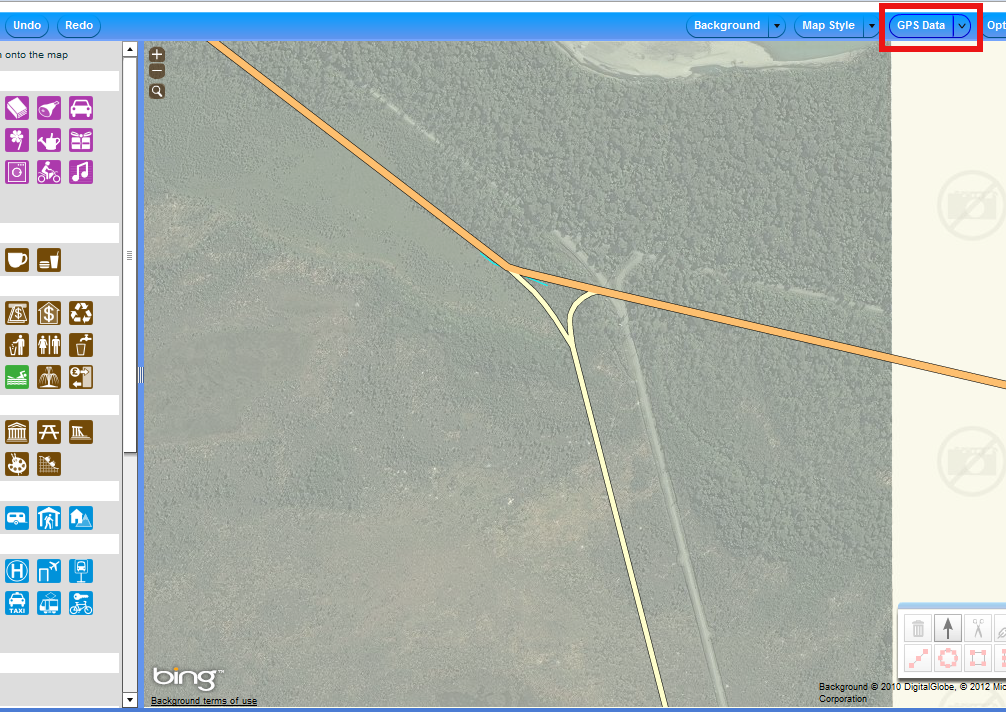 The problem here is that aerial imagery is not aligned with the ways already mapped. So you need to decide which one is right here: The aerial image? Or the mapped ways?

Click on the indicated "GPS Data" button. This will bring up any GPS trace data existing for that area, as thin cyan (light blue) lines. You can barely see it in this example on the left side of the triangular road intersection. The important bit here is not perfect alignment - but this thin blue line indicates that someone moved through that space with a GPS, so the road is probably there.

Which means that in this example, the ways mapped in OSM are correct, and the aerial imagery background has to be adjusted before you do any further mapping. You can do this by holding down SPACE on your keyboard and dragging the aerial image with your mouse, until it aligns with the OSM ways.