Dshpak is, as far as he can tell, the first OSM mapper in Winnipeg, Manitoba, Canada. He has begun haphazard mapping of Winnipeg, with a focus on Transcona, St. Boniface, and city centre.

Dshpak is the author of Lakewalker, a tool that creates OSM data by tracing Landsat imagery. He has been using this to trace lakes in Canada, particularly in Manitoba. 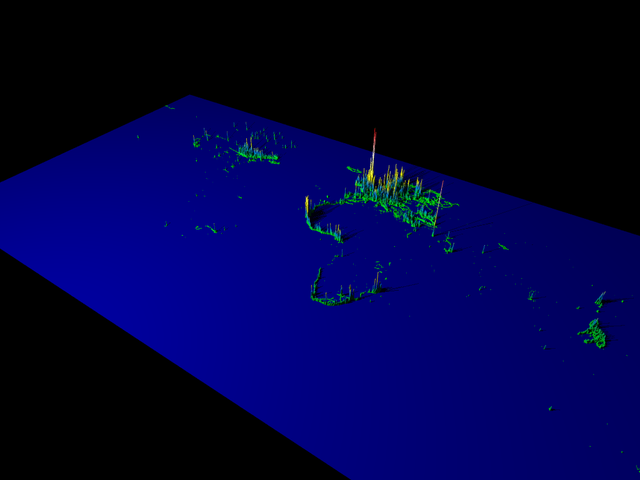 Some random stats that I collected from planet.osm:

There are 1555 different keys.

989 keys are only used once (see unique_keys.txt).

There are 445 different values for the 'highway' key. 221 of them are only used once (see unique-highway-vals.txt).

The most popular values for the 'highway' key are:

Apr 20-21 2007: Traced the Red, Assiniboine, and Seine rivers, as well as the Red River Floodway, from the Yahoo maps. Proposed waterway=floodway. Added the first portions of Lagimodiere and Bishop Grandin.

May 9 2007: Rendered yesterday's Lake Winnipeg tiles. Ran lowzoom for the entire region (the 7,10,5 region, then the 1,2,3 region.). Mapped portions of the river walk and the Legislative grounds; also a couple new ways in Elmwood. Finished tracing Lake Winnipeg

May 10 2007: Rendered most of Lake Winnipeg, including lowzoom tiles. Wrote a tool to process planet.osm and generate stats on key/value usages in tags.

May 11 2007: Played with planet.osm. Gathered a bunch of stats on the most common / least common tags and values. Rendered various images showing the geographical distribution of OSM data.

May 12 2007: Collected tracks for some roads outside my usual territory, including parts of highways 59 and 101, Burroughs, and north Main Street. Partially mapped them.

May 14 2007: Traced a couple islands in Lake Winnipeg. Rendered most of the "missing" coastline tiles for Lake Winnipeg (May 10th's render missed a bunch, because the API didn't deliver all the OSM files properly).

May 15 2007: Added some back lanes in Elmwood / St. Boniface, and added street names for most of the Provencher-Red-Seine triangle.

May 18-22 2007: On vacation. Collected tracklogs between Winnipeg and Edmonton.

May 23 2007: Began mapping the Trans-Canada highway west of Winnipeg based on vacation tracklogs. Spent way too much time trying to get the tiles (and lowzoom tiles) to render properly. Re-rendered some parts of the Lake Winnipeg coastline that mysteriously vanished. Traced a few new islands in Lake Winnipeg (notably Hecla Island).

May 24-28: Continued tracing the Trans-Canada highway and Hwy 101. Almost got to Regina. Further discussion on Canadian highway tagging with srw, jrreid, Burgundavia on #osm; I need to update the Winnipeg, Manitoba, and Canada pages. Spent some time trying to use Landsat data to update oceantiles.png; didn't get anywhere.

June 9: Wrote a tool to automatically trace lake shorelines from Landsat IR-1 imagery. It gets stuck on some lakes, but works on others. Traced and uploaded several Manitoba lakes.

July 8: After a brief hiatus, I'm back and mapping again. Mapped highways based on traces I've gotten on a trip to Bird's Hill Park, a trip to Lac du Bonnet, and a trip to the Lockport/Selkirk area.

July 9: Traced the Yellowhead highway from Russell to Winnipeg (srw had previously traced it from Saskatoon to Russell). Went over Lake Manitoba, to fix up all the collisions between my lake tracer data, and morwen's coastline import. I took the best data for each segment of coastline; my data was higher resolution, but morwen's was more accurate in some cases.