Canada (pronouced /ˈkænədə/) is a country occupying most of northern North America, extending from the Atlantic Ocean in the east to the Pacific Ocean in the west and northward into the Arctic Ocean. It is the world's second largest country by total area. Canada's common border with the United States to the south and northwest is the longest in the world.

This page is a starting point with information relating to Canadian mapping activity.

There is a mailing list set up for Canadian mappers. Most discussion about country-wide matters takes place there. Both official languages are welcome. Join the list here.

There is a Slack project: https://osm-ca.slack.com/. Create an account for it via https://slackinviteosmcanada.herokuapp.com/

There is also a OpenStreetMap Canada Facebook page Please make sure everyone who indicates that they are a 'fan' to become an admin to the page, this way, all content of the page can be edited by everyone. (Just like OSM & the wiki)

GPS tracks perhaps the best way to collect data. When you go out on trips, take along your GPS device and upload your traces to OSM. Be sure that your GPS device is set not to lock traces to the copyrighted data stored in the device; the purpose of collecting traces is to create new, unencumbered data. Photo mapping is an efficient way to create detailed maps.

Mapping parties are a great way to kick off mapping efforts in a sparsely-mapped area. By contacting other local area mappers, you can arrange to meet in a place that is convenient for everyone. When you meet with other mappers you can then learn first-hand the other techniques that are available, as with OSM, the possibilities are limited only by your imagination.

For those without a GPS, fieldpapers.org allows you to draw directly on a printed OSM map, scan it, and trace from it using an OSM editor.

For boundaries of municipalities and neighbourhoods, see Canada admin level.

Since 2008, the federal government has released a wealth of geodata for use in OSM. The OSM community is at work completing the existing OSM content with the government data.

Initial efforts were based on simple feature data from GeoBase, which includes administrative boundaries, place names, roads, and bodies of water. This import was mostly done wholesale in areas with little previous OSM data. Before street names were added into the GeoBase data, street names from Statistics Canada were imported; this resulted in many incorrect street names because of the differing geometry between the two datasets.

Currently, the data source of choice for importing is CanVec from Natural Resources Canada, containing most of the GeoBase data, plus extras such as important buildings. NRCan is generating an OSM XML version of the CanVec 6.0 dataset, and the most populous areas are now available. These files can be imported using offline editors such as JOSM. Please only import areas and features you are familiar with. If you have any questions about how to import the data, ask on the list or channel.

Here are some other government sources that may contain additional data.

Toporama, a WMS service serving rasterized CanVec data, can be used as a background layer in OSM editors. To use it in JOSM's WMS plugin, use these links: [1] (more detailed), or [2] (less detailed). The GeoBase NHN WMS at [3] provides more detail for water features, such as water flow direction and water junctions. 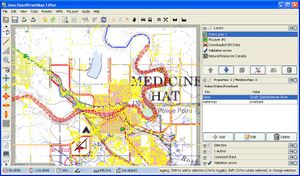 show much of the same data as CanVec, though the geometry may be as much a 1.2 km off from reality in some areas. This can be worked around using a map rectifier such as JOSM's PicLayer or Map Warper.

Statistics Canada data is used to import street names where they are missing from the other data sets. It is advised to not copy the geometry; however, you can use the street names database as a reference.

Atlas of Canada, available using WMS, contains some features not in GeoBase, CanVec, or StatCan, but only at a scale of 1:7500000.

Ibycus Topo is a Garmin map compiled directly from source CanVec data (shp files) as well as GeoBase data (shp files). This is a free (dont sell) non-routable map which also includes great contours from CanVec. (contours are not included in OSM, so GroundTruth Planet Contour is used instead). This can be used as a supplement when using OSM Maps as an overlay. NOTE: The .typ file (tags) which was used for conversion is slightly different than the tags used in the OSM version. However, as this import process will take some time, end-users are welcome to use both maps for navigating, and users can 'pretend' that the CanVec data is already in OSM, while finding new features to add to OSM.

Open Data - many municipalities have Open Data datasets suitable for importing now, this is a list of them

If you have a goal that you are working towards or one that you would like to see get done (and are maybe willing to get the ball rolling) then add it to the list here, create a section where it can be coordinated and tracked, and a way of measuring progress.

Stats Canada has released building outlines under the federal government license. This is the associated import plan.

Building Canada 2020 Initiative (BC2020i) was a community-led initiative with the vision to map all buildings in Canada on OpenStreetMap by the year 2020. The initiative has become Canada/Building_Canada_2020.

Simple information on buildings (geolocation, building footprint, full address and type of use) is of major societal value. This information, however, is often lacking in some areas or not completely accessible on a single open data platform. Creating a nation-wide, freely accessible and non-proprietary source of information on buildings will contribute to the development of the data infrastructures of the future, upon which a multitude of public and private projects could thrive.

This project appears to have become abandoned in late 2017 and/or has morphed into something approximated by Canada/Building_Canada_2020, above. Note Stats Canada is funded 1st April to March 31st. There is work being done in the background by Stats Canada and more open data buildings are expected to be released shortly. 2018/10/21

The Garmin MapSource (Windows) Installer file for each province is available here http://www.mediafire.com/?sharekey=3b30da6df5072902ab1eab3e9fa335caa2ed10992d240aa5

created from the OSM download of the outline of each province from http://downloads.cloudmade.com/north_america/canada .shp files are also available as well as pre-made .img tiles that you can install directly onto the device\

Status: Please note the copyright restriction. ALL route infrastructure must be actually navigated with GPS and/or imported from one of the data sources that have the same compatible license as OpenStreetMap. See Canada Import Status. Specific Trans Canada Trail segments are mapped as province-wide relations tagged as a national cycleway network — network=ncn — coalesced as a super-relation, only if the route infrastructure elements are end-to-end usable by a bicycle (see Cycle routes). Otherwise, the Trail segments should be mapped as "regular" trails with tags of highway=path, highway=footway, highway=track or highway=bridleway.

Canada has a wide range of data that can be imported. So if you are local and on the ground the best place to start is checking the interfaces between the imported data and the data that was in place before. Typically you'll find that imported CanVec data has been truncated at the interface with original OSM data so make sure that the roads that should be joined are. You may find roads traced in from satellite images are not quite in the right place. GPS traces can help here.

When you browse the slippy map on openstreetmap.org, note the + sign to the right. Zoom in first then click on it, and tick the data box. Note the Points of Interest (POI) that show on the left. Click on one these and you'll see the tag values for the POI including things like website that are in the database. This means tags such as phone=*, website=* etc are worth entering even though they don't immediately show on the map but are accessible if you want to order a take away. Note the warning that comes up about the number of POIs and the amount of data that must be transferred. Ideally we do not want to store redundant data so for an address we want addr:housenumber=*, addr:street=*, and addr:postcode=*. Cities typically are marked in OSM as a place and a boundary relation and anything in the city's boundary is assumed to be in the city. So when we search, we take the city information from the objects describing the city itself. Provinces and country are the same. Address interpolation is a useful way of keeping the number of POIs down but still allowing a search by house number.

OSM has different methods of rendering. Some of these rendering systems can make use of French as well as English names. For bilingual areas such as Ottawa the convention is to enter the English name under name, and the French name under name:fr. Example name "Wilkie Drive" name:fr "promenade Wilkie". Renderers such as Maperitive can be set to display the French names as default.

Note also that most rendering systems will not show all the POIs on the map. The ones that are omitted can be shown by the use of "rules" but this is currently a little more complicated than casual users might like.

OSM is an electronic database that is converted or rendered into a visible map by programs. Programs are dumb but very fast. They work best with consistent tags so follow the Canadian tagging guidelines and the Map Features. For example cycle lanes should be labeled cycleway=lane to show up on + "Cycle Map". There are now some applications that work with the POIs, such as MapOSMatic, but in order to find the right ones the tags must be consistent. There are bots that are run on the data cleaning it up so it is not necessary to clean up existing tags, leave it to the bots.

Please add value by adding footpaths, specialist stores, playgrounds and parks. These are often missing from other maps.

What's with the forests in Canada? 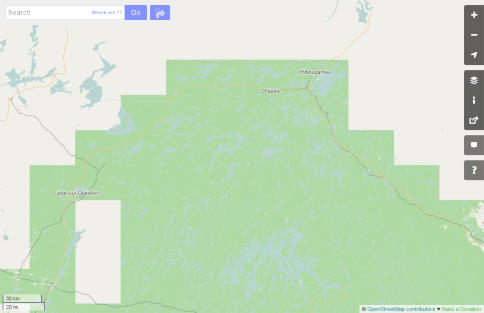 The squared off sections of forest in Canada are the result of the ongoing CanVec data import. CanVec tiles were broken up into squares called the NTS grid to better manage the data import. If you see a forest that's squared off with a empty section beside it, it's most likely that that grid has not been imported yet.

Open Data catalogs can be found here Note not all Open Data aligns with the OpenStreetMap licence. Currently the federal government,City of Ottawa have been approved. Vancouver my understanding is the data has been given to OpenStreetMap but no other open data licence aligns with OSM thus cannot be used for imports etc. 2018/10/18.