Imports and automated edits should only be carried out by those with experience and understanding of the way the OpenStreetMap community creates maps, and only with careful planning and consultation with the local community.
See Import/Guidelines and Automated Edits code of conduct for more information. Imports/automated edits which do not follow these guidelines might be reverted!

Natural Resource Canada supports the work done by the Canadian OpenStreetMap Community by offering an .osm version of its CanVec product. This product can be uploaded in OpenStreetMap database using Potlatch, JOSM, Merkaator or other editing tools.

Many experienced OSM users have inadvertently broken parts of the map while importing CanVec data. If you are going to import data from the NRCAN .OSM files, please try to keep the following in mind

See below the section § CanVec product - Datasets to find the files. 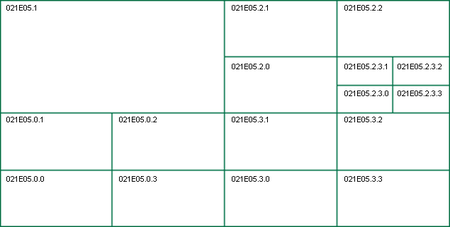 The product is tiled based on National Topographic System (NTS) map sheets—see Canada NTS Tile System. Each map sheet is sub tiled using a quadtree algorithm. Subtree naming convention is SW=0, NW=1, NE=2, SE=3. A tile is split when there are more than 25K nodes in it. Each tile is a separate .osm file. All files are zipped together.

The CanVec.osm datasets are available from the NRCAN ftp http://ftp.maps.canada.ca/pub/nrcan_rncan/vector/osm/.

Available datasets are classified using their National Topographic System (NTS) number. To find the NTS number of an area of interest:

These datasets are provided to the community under the standard CanVec Product Licence.

To keep track of what is going on with CanVec Import. Tiles that are being imported by an OSM contributor are identified in google docs chart, as 'Work in Progress' / planning / complete.

If you wish to import CanVec tiles to a "white space" in OSM, just look at the chart.

Please see the CanVec Import Status Google Doc's chart for details of the progress. The chart is open to Public Access, and it maintained by User:Acrosscanadatrails. It is requested to sign in with a username (so then others know who is working on the chart). If you would like editing access, please just ask the talk-ca list, or #osm-ca IRC chat.

In this series of videos, I go through the process of importing CanVec, from the simple situations up to the more complex. I assume that the user has basic working knowledge of JOSM (e.g., they have several hours of basic node/way/relation editing).

Potlatch takes a different approach, encouraging you to bring objects in one-by-one so that you review them as you go, rather than simply uploading the imported file.

Processing was started on July 5, 2010 and finished on September 4, 2010 (including addendum reprocessing).

Document any issues found with the CanVec imports. To help those participating in the imports to learn, fix and improve the quality of future imports.

76770314
Duplicate land features
Islands have two different but practically identical polygons. One as an inner relation for the body of water and the other defining an outer relation for woods. For example 617212467

325549517 tagged as woods imported 2018.
Improperly tagged islands
Many islands in Ontario were imported as inner relations to bodies of water but improperly tagged as natural=water. Many have been corrected by various users. Discussed in comments of changeset 40216005 (Visualise) and errors will be corrected.