Jochen and I have produced a "real" paper map of the city of Freiburg for the FOSSGIS 2008 conference. The map is an A3, two sided, full colour print, folded just like street maps are usually folded; we have printed 1,000 copies for a total price of 360 Euros plus VAT. One side of the map has a detailed city plan, the other side has a "grand picture" overview and copious OSM advertising on it.

We're very proud of the quality we achieved here. Both maps were created with Osmarender (one with the original XSLT variant, one with my Perl implementation as a "proof of concept"). It was quite a lot of work; we first tweaked the rules file to get the right colours (i.e. the usual colours in German city maps), then we did some modifications on the OSM file itself using JOSM (some of which we uploaded and some not because they were specific for this map, like breaking a way in the middle to achieve better text placement). After that we created the SVG file and fine-tuned that with Inkscape. Finally, a high-resolution PNG was rendered and a finishing touch was applied using the GIMP (removing some rendering artifacts etc). The resulting bitmap was then again imported into a new SVG document, from which we created the PDFs for printing.

A photo of the finished "real printed maps" is here:

This is an excerpt of the city map: 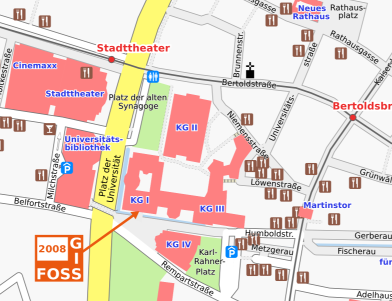 Some people have asked about the process we used to create the map, I'll try and remember (the process is the same for the inner city detail and for the overview map, of course one would use different styles for the overview, like omitting the names of residential roads and drawing them as a grey line only).

The whole job for the Freiburg map took us about one man-week, including some data fixes (at one point we had to contact a mapper in Freiburg and send him to check something that looked wrong).