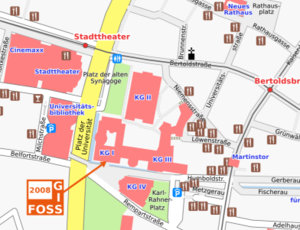 Extract of the printed map of Freiburg showing the conference location 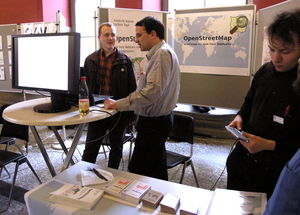 OSM Info point at the FOSSGIS 2008

FOSSGIS is an Open Source GIS conference. The past event in 2008 took place in Freiburg im Breisgau, Germany, from April 1st to April 3rd.

TODO: Any information about how it went

There was going to be an OSM booth organized by User:Joto and User:Frederik Ramm and manned by community members. There was three(!) talks about OSM and a discussion/workshop-like event.

It was planned to hand a printed map of Freiburg based on OSM data to all participants as part of their welcome package.