From OpenStreetMap Wiki
< User:Imagic
Jump to navigation Jump to search

In 2012 the suffix :lanes was introduced to allow the specification of properties of individual lanes. Analogous to the already existing suffixes :forward and :backward (and some more) it uses existing keys and changes the scope - but not the meaning - of their values.

Example 2: With minspeed=80 a minimum speed of 80 is specified. If we want to specify a minimum speed limit of 80 for the left lane and 50 for the right lane, we would use minspeed:lanes=80|50.

Main properties of the suffix :lanes:

The missing possibility to specify turning indications was the driving force of the introduction of the :lanes suffix, therefore the key turn=* was introduced at the same time. The turn=* key is used to specify the indicated direction in which a way or a lane will lead. It is used on the way segment from the first indication via road markings, signposts or similar indications to the junction or completion of merge. Attention: this key is not used for legal turning restrictions!

Pay attention to the value of the lanes=* key. See the proposal of the :lanes extension for an explanation.

The key change is used to specify legally allowed and forbidden lane changes. The following example assumes that the OSM way runs from left to right.

Direction of a road

The key destination=* is used to indicate the direction of a road by specifying the name(s) of the place(s) the road is leading to. In situations where no lane-specific information is available, this key might deliver enough information to guide one through even complex junctions. Besides the main tag, a few subkeys are proposed, which provide additional information:

Usually the OSM way of a road is drawn in the middle of that road. This often is not true when a road forks or another road joins and therefore the lane count changes. The key placement=* can be put on that part of a OSM way that is not in the middle of the road. Useful suffixes for this key are :forward, :backward, :start and :end.

Besides providing the layout of lanes, the key placement=* can also be used to get a better estimation of the connection of lanes between different OSM ways. For example, if a section tagged with lanes=2 connects to another section with lanes=3, one does not know where the third lane is added. If we now add placement=right_of:2 to the section with three lanes, it is very likely, that the third lane was added on the left side of the road. This is still a guess, but in many situations this information is enough to guess correct. When using this key to estimate lane connectivity, one must be sure to consider the width of the road resp. lanes!

The following section presents a few open issues related to the specification of lanes. When discussing possible solutions to these issues, one has to keep in mind the following: 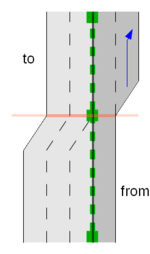 Currently no concept exists to specify how lanes are linked to each other between different road segments. The key placement=* can be used to make better guesses, but it does not provide accurate information. The most obvious solution (from a data-point-of-view) would be a relation like in the proposal of the lane_link relation. The example on the right would need one relation with two members ("from" and "to") and the following tags:

We assume, that both OSM ways run upwards.

The main problem with a relation is usually that it is a relation, i.e. the acceptance in the community is rather low.

At least for situations which involve only two OSM ways a simpler solution might yield higher acceptance. One possible solution could be a tag, that describes how a lane continues in the next road segment. In the previous example we could use transit:forward=new_on_right on the from-way and transit:lanes:backward=new_on_left|continue on the to-way. Besides better readability compared to the lane-numbers used in the relation, this wont force mappers to switch from tags to relation while editing lanes. As soon as more than two OSM ways connect, this tag is ambiguous, so we would need some rules to determine to which two ways the tag refers. One obvious approach would be: same name, same reference and smallest angle. From a data-point-of-view, the tag would be a very bad solution, but it might yield more data provided by the contributors.

When determining the connection of lanes between different road segments, one should consider the following information in the given order: 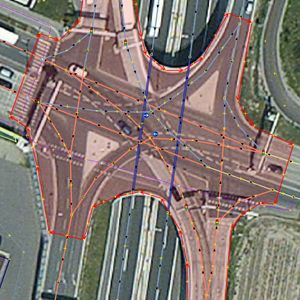 In many situations it is necessary to know the extent of a junction, e.g. to determine exactly what streets enter and leave a junction in order to give more precise navigation instruction or what features belong to a single junction. The most obvious solution for this is an area and this is also proposed in the highway=junction proposal. This tagging scheme would not only provide information about the extent of the junction but also reduces the need of turning restrictions, i.e. less work for the mapper, more data for the consumer.

Not a problem, but something consumers have to pay attention to: when processing lane-dependent access restrictions, one has to be aware that those restrictions usually do not apply to lane changes.

Example: A road with three lanes, the lane in the middle is a cycle lane and the rightmost lane is for turning right.