I'm new to this, but having fun so far. I'm using a GlobalSat BT308 Bluetooth GPS Receiver with a Nokia N73 and the Nokia Sports Tracker software. It seems to do the job, but what I could really do with is a way of recording specific points when I'm out and about - so I probably need to look for some different software.

Much of the work I've done is with my partner, Jenny - I drive, she makes copious notes, and is fed up with me driving all the way around roundabouts and making her dizzy!

My aims at the moment are to complete the area around where I live - between York, Selby and Leeds. The Leeds Mapping Party gave me an excuse to fill in some gaps on the Leeds side, and to record the A63 out to Selby. Having had a closer look around North and East Yorkshire, and most of my favourite roads are missing. Looks like I've got lots of work to do! The next projects are:

Beyond that, I have loads of questions about how to model various junctions and road layouts, and whether the Map Features and Editing Standards and Conventions need some more work. (Current areas I'm struggling with are the singletrack roads round my way - I'd like to tag them as such, but don't think that a new highway value is the right way to do it - and motorway junctions, particularly modelling roundabouts over the motorway - the layer=1/bridge=yes convention doesn't fit well as you have to break the roundabout's own way to do it, or you fly the whole roundabout, creating seams with the adjoining roads.) If only i had more time...

My efforts on this project

Leeds city centre is at the far left, York is the top-most trace, Bubwith is at the far right, and the bottom trace is the A645 between the A19 and Snaith. 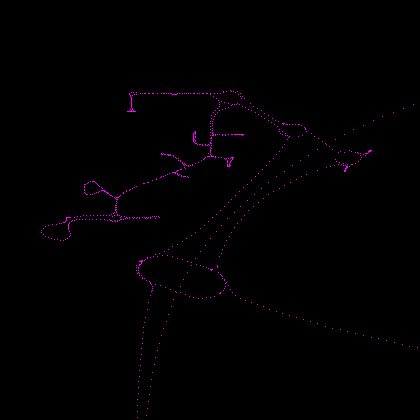