Bought a Garmin GPSmap 60CSx in March 2007 primary for recording and backtracking mountainbike routes. Being Dutch and therefore loving free stuff I decided to contribute to this project; mainly mapping Apeldoorn, it's beautiful surroundings (Veluwe) and pretty much anywhere else I go....

Some photos taken while tracking

The focus of my contributions for OSM is on:

Since the addition of the AND data focus shifted to correcting the old data (as it seems to be last updated somewhere in 2002) and adding missing ways, cycleways, footpaths and tracks.

Early 2008 I started an initiative to make a map in the Frisian language. Fryslân is a Dutch province with a rich culture quite different from other parts of the Netherlands. It has it's own language (second official language) and has different place names among other things which justifies a separate mapping effort. The Frisian map is hosted on the Dutch tileserver, kindly sponsored by Oxilion. The Frisian map inspired other members of the Dutch OSM community to create a Carnival map where placenames are replaced with Carnival names.

In april 2007 I took over the unofficial forum from Dave Leverton (who actually set it up as a test) and began running it over at osm.na1400.info until it moved to the http://forum.openstreetmap.org domain (end of October 2007).

The forum now uses the main OpenStreetMap userbase for authentication. No need for a separate forum username/password anymore.

Since the AND data was imported, The Netherlands have the most complete road system in OpenStreetMap than any other country. This opens up possibilities for real use of the OSM data, so I decided to put Garmin maps together. They can be downloaded from: http://garmin.openstreetmap.nl . There is now also worldwide coverage for routable Garmin maps.

These maps have proven to be a good testing ground for the Mkgmap software which resulted in a lot of other people to produce Garmin maps for every part of the world.

Now there is a reasonably complete coverage of data in the Netherlands the next step is to put the data to good use. A webbased routeplanner is a good example. I started working on a routeplanner for The Netherlands late May 2008 combining Gosmore routing engine, NameFinder service and OpenLayers. Pretty soon users requested support for their country as well resulting in a worldwide routing service named YOURS. It's pretty much a work in progress. More info on the forum and on the YOURS wiki page.

Wile mapping a lot of housenumbers I found that the Terracer plugin for JOSM could use some work, so I have enhanced and expanded the functionality of it:

It took a lot of time to get accustomed with the Java quirks (no passing of variables by reference to functions for example) and getting a feel for the inner workings of JOSM, but the result is much better and it's really easy to map housenumbers on buildings now, even if it's a house that doesn't need terracing at all :-)

I use the following tags which are not approved or proposed:

I like the idea of free data being used for navigation purposes. Especially as there are no proper cycle routeplanners. There are a few opensource software navigation applications around, one of which is RoadNav.

Below is an screenshot of RoadNav showing a part of Apeldoorn based on OpenStreetMap data. Cool eh?! 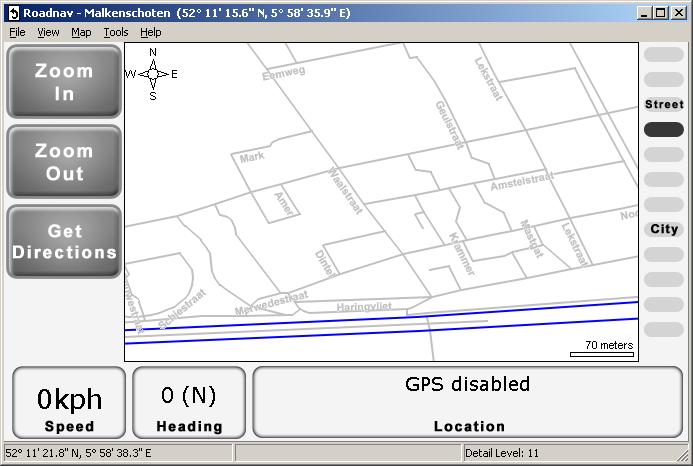 RoadNav does not seem to differentiate between footways, cycleways or any other kind of way (it renders them all the same), only important roads like primary, trunk and motorway are rendered differently. I'm curious how navigating a car over a footbridge is going to be like :-)

Probably not intentionally graffiti, but all by the same user:

Lambertus is awarded a MegaStar for uploading one million track points.