I live in Canberra, Australia.

I recently purchased a Garmin Geko 201 GPS for recreational use, and have begun contributing to the map of Canberra.

Australia is a very large place. So large, in fact, that it is not reasonable to expect people to travel hours along regional roads just for mapping purposes. Killing two birds with the one stone, I'm interested in recording any regional routes that I happen to tour along for various reasons.

I live in Canberra, and in the city environment it is possible to utilise small amounts of time collecting geodata. I enjoy collecting GPS data on bicycle.

I am interested in aiming for consistency across the Australian map, and encourage Australian contributors to get involved in the discussion at Australian Roads Tagging.

Living in Canberra offers the luxury of enjoying many dedicated cycleways. These are typically not well covered by commercial maps, and one of the strengths of OpenStreetMap is that they can be accurately mapped in detail. I am interested in Rendering Cycleway Maps from the OSM data.

I love the animated history of the London OSM map that User:Randomjunk has produced, and so I'm hoping to do something similar for Canberra. On the left below is the Canberra map as it was on May 10, 2007, which is approximately when I started contributing to OSM. On the right is the map as it was on November 2, 2007, which is the last time I rendered it. 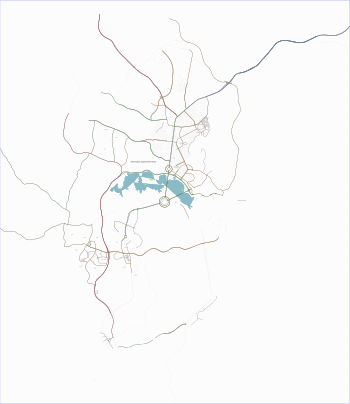 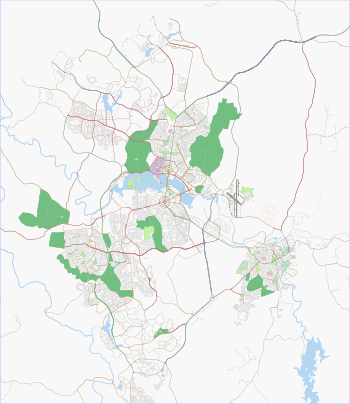 Here is an animation showing this development, where each frame is a weekly render. The most recent changes (over the last week) are highlighted in the second animation.

These are things that I regularly use or refer to:

To continously generate tilesets as requested by the server, and upload each tileset to the server: