OpenStreetMap isn't a computer project, it's an outdoors activity.
Less of the bulk imports and wikifiddling please.
Go outside and map!

My OSM user is randomjunk.

I'm helping Andy out with his cycle map. He uses my machine to render the tiles.

I thrashed the OSM DB server for a while last week, and produced some interesting images of the GPS points that people have uploaded to OSM. 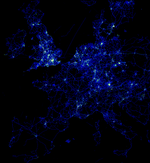 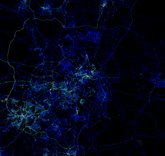 It would be a bit tricky to do anything for a larger area because of the difficulty in obtaining these points. The European image contains 115 million GPS points, and I had to make more than a few thousand queries to the DB to get them (spread over about 24 hours though). It would be useful to have a "Planet.gpx"... but most of the time I can't imagine it would be any use... just the odd pretty picture.

The code to render these images works by building a 2D frequency array of points and then scaling each point against the 95th percentile point to generate the image. It's a complete hack script, and I haven't tried to tidy it up at all. To run it do:

If you don't supply a bbox then the program will make two scans of the gps file -- the first calculates the extent. The GPS file is a simple file containing a point on each line, each point being two floating point numbers separated by a tab. The file can be gzipped.

Using the data from npe-maps and free the postcode, I created a slippy map showing the rough postcode area polygons that the data implies.

The code for this is on the page. The tiles are rendered using Mapnik.

I was playing with rendering differently for different countries.

This is really simple.

It has some problems:

I'm currently creating every week some over view plots of various areas to demonstrate progress in OSM.

These used to be rendered using Osmarender (for the London one.. I wasn't doing the others) but unfortunately that method suffers from an exponential increase in time and memory usage as the size of OSM data increases. When the Greater London .svg file topped 250MB everything broke.

So now I'm using Mapnik. The process is:

This process is approximately linear with the planet size (possibly n log n... haven't really thought about it much) -- most of the time is spent importing the planet (about 5 hours). Anyway it renders the entire USA in about 5 minutes... so it's not slow once the data is imported.

For anybody interested in how File:LondonProgress.gif was rendered (and hence the above animation), get ready to be scared to death by the hackery:

First off the data is grabbed using the following python script which downloads it bit by bit in "tiles". It's done like this so as not to stress the OSM server too much by requesting large areas (areas this big aren't allowed anyway), and to spread the requests out over an hour or two too. I'd use the planet file except that it wasn't very reliable at the time I started this, and it seemed a bit pointless downloading 350MB for just a tiny lump of it.

Then all the "tiles" are stuck together. This is the dirty bit! (footer and header are just files containing an XML OSM file start and end, the awk is there to strip the <bounds> elements the api now puts in):

The data.osm file is 35MB for this area.

I then used xsltproc to do the render to SVG using a standard osmarender rules file, but I did modify it to make the tube lines show up better, and to turn on segments painting. The resulting SVG is 63MB... a bit huge, and takes a good half hour and most of the RAM in my box to do.

I then used rsvg to render the SVG to PNG specifying the width as 1280 pixels. This takes just a couple of minutes, and only uses a moderately stupid amount of RAM to achieve.

I've been doing this once a week since mid October 2006, you can see the results of this here.

At the current growth rate of done areas I'm going to run out of RAM in about 6 months :-( ... yup.. run out of RAM... rethink required: going with Mapnik -- see above.