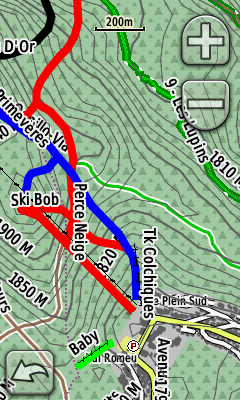 The typical set-up for a custom Garmin map is the use of three different layers (of unique family-id, see this page (in french) for more details), made with Mkgmap: contour lines relief layer, routing layer and the basemap.
You'll find here the layer styles I made with the ressources (style and TYP files) needed.

Maps should be rendered accurately on Colorado/Oregon/Dakota generation handhelds and following. Previous generations (eTrex...) use a limited color palette and may have a quite random rendering, with high risk of ugly map.
Screen captures were made with an Oregon 300.

A routing layer (link in french) is not meant to be visible but stay behind the basemap, its appearence doesn't need to be modified (left image). However, if we want to use this simplified map as main map, a TYP file can give the map the look on the right.

This TYP file only applies to layers with family-id=43, ways are colored like this:

This layer only displays man_made=survey_point tagged points, and only those with an altitude set. 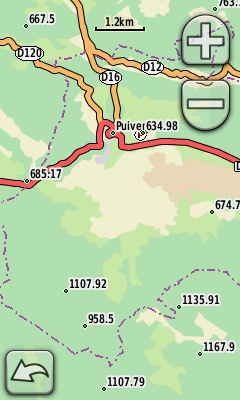 Pseudo-mapnik style wanting to look like OpenStreetMap's main map. There are no bridges nor tunnels, two versions are given: with or without POIs as my handheld GPS displays its own icons above those from the map.

ClearMap is a style inspired by Ollie O’Brien maps, themselves inspired by orienteering maps. There are no POIs (out of cities).
These maps are better intended for pedestrian use, the slimness of lines making it not so readable in a car or on a bike.

The only polygons displayed are water surfaces (light blue).

P-Map is my main map style. Ways are thick and colourful to be easily readable in a car on on a bike, emphasis has been given to tracks and paths, useful in hiking and MTB rides.

p-map is made for GPS navigators while p-map-bc is for BaseCamp or Mapsource.

p-map-bc (on the right) style is optimized for BaseCamp, lines are finer, surfaces less colored.

Style based on level 11 Osmarender former rendering. Osmarender gave at low scales a good view of the level of mapping of an area. Given its particularities (thin lines, no surfaces except water), it is to be used in MapSource or BaseCamp better than on a handheld. 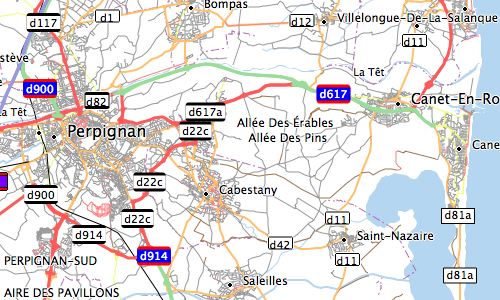 HC-Map is meant to be simple and readable. Bright colors were chosen to allow use in sunlight, with no screen backlight.

This layer (to be added to a basemap), displays cycleways and route relations (bike and MTB). Its a family-id=45 TYP file.

This layer (to be added to a basemap) displays ways and places where to practice winter sports: skiing and snow-shoes. Its a family-id=45 TYP file. Ski resorts, downhill and nordic pistes, various ski lifts and snowshoeing tracks are shown.

Pistes can be seen on OpenPisteMap.
Garmin map of ski resorts are also available on Skidea.

This style is base upon the soft Open MapQuest maps style. I use it in BaseCamp and in my navigator's automobile mode. 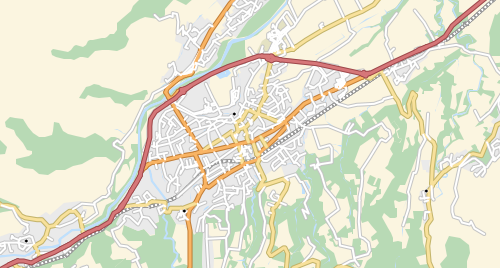 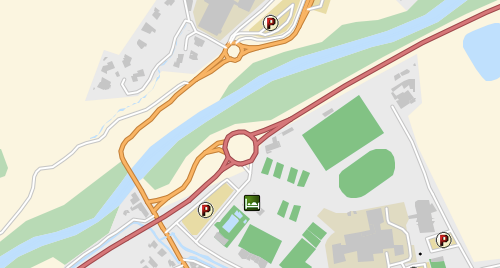 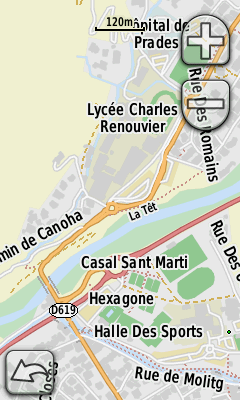