Schadow1 while on its mapping expedition of Hibok-Hibok Volcano

Good day, I am Ervin Malicdem, commonly known in cyberspace as schadow1 and is primarily based in Las Piñas Philippines but now can be found almost every corner of the country. I am a regular in the internet since 1996 and is normally thriving through tech and gadgets forums. Since I learned driving when I was only 12 years old, I have already realized the importance of maps in our daily lives and the only available map during that time is map booklet available in convenience stores beside gasoline stations and book stores. The map of my location has erroneous streets and all I can do that time is to call the publisher and report the error but was never fixed in the long run and so I came frustrated of having an accurate map of the community where I dwell. It is only by 2004 that I have been indulged in satellite imagery but was heart broken learning that the resolution of the area where I live is too low and hardly distinguishable. I dreamed to have a way to input the details of my location accurately. It is only by November of 2008 that I was introduced to Openstreetmap and learned that I can edit the map in real-time thus curing my frustration of creating an accurate map of the Philippines and was finally able to fix the streets of where I live.

From then I have been mapping the country through satellite imagery trace but was held back by low resolution satellite images from Bing. This has then gave me the opportunity to re-surface my once adventurous childhood which was held back by being a geek when computers and internet started to proliferate. From arm-chair mapping, I have started going out once more to enjoy the Philippines while mapping the country to where there are no high resolution satellite imagery is available. Alas! A mixture of geeky and outdoor person combined into one due to mapping.

I own a Philippine travel, backpacking and mapping blog to which serves as my journal in enjoying the Philippines and at the same time mapping the "uncharted" areas of the country. Mapping expeditions are filed under the Mapping category. 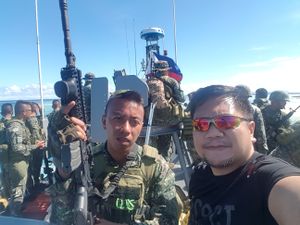 Schadow1, together with the Armed Forces of the Philippines during a mapping expedition in Tawi-Tawi

The following are some of the locations in the Philippines that became part of my mapping expeditions in ensuring a Filipino must not be a stranger to his own motherland.

The following are some of the mountain expeditions I made for the Philippines.

During the Typhoon Haiyan 2013 (local: Yolanda) onslaught in the Philippines, Schadow1 Expeditions was one of the first responders for the call for humanitarian mapping expedition by mapping up key locations in the Visayas that may need to be used by the mobilization of humanitarian relief and rehabilitation missions. This is together with other 1100+ mapping advocates that heed the call which resulted to a record-breaking crowd-sourced mapping action of 1 million updates in just one week. (Ref. List of respondents)

Additionally, Schadow1 has activated a daily GPS map update of the Philippines based on Openstreetmap data (in comparison to the weekly regular updates) to be able to cope up with the surge in map data updates by the humanitarian mapping activation and with the necessity of humanitarian missions to use the GPS mapping data.

Schadow1 Expeditions has provided a shapefile based on 2017-12-05 extract of OpenStreetMap data to which structures are categorized accordingly on its post-war status. Damage tags were provided and is based from Blake Girardot's HOT Damage Tagging Proposal

For request of data (shapefile) and more info: 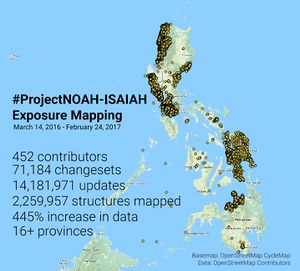 Over 71,000 changesets made to OSM through the NOAH initiative

As a Chief Science Research Specialist of the ISAIAH module of DOST-Project NOAH in 2016-2017, Schadow1 led its mapping initiative in mapping the structures of 15 provinces for disaster risk reduction management and risk analysis. Together with NOAH, various agencies, local governments, educational institutions, communities and organizations, 16 provinces were mapped adding up 445% or over 2.2 million structures in OpenStreetMap for the Philippines. A total of 452 OpenStreetMap contributors heed the call Map your Community in OpenStreetMap with Project NOAH and made 14,181,971 map changes. Out of the 14 million, Schadow1 made over 1.7 million changes.

These include the provinces of:

For more information on the importance of this project, proceed to Project NOAH, NOAH finishes mapping building footprints of 16 provinces

For more information on our mapping expeditions, visit my blog at Schadow1 Expeditions