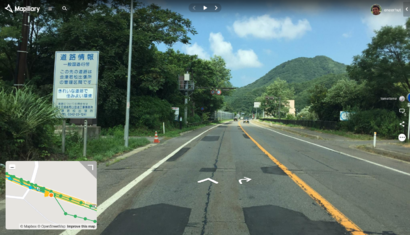 Mapillary photo showing the contributions of tometome in Japan. 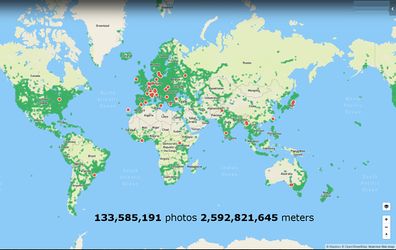 Mapillary (mapillary.com) is a service for sharing geotagged photos developed by a Swedish startup, that was sold to Facebook in June 2020.[2] Its creators want to represent the whole world (not only streets) with photos [3][4]. They believe that for covering all interesting places in the world, there needs to be an independent, crowd-sourced project and a systematic approach to cover interesting areas. Services like Google, having especially equipped cars with camera mounts, are not going to be able to cover the world in sufficient detail [3]. According to them, the local knowledge is almost unbeatable, and people know what really matters in capturing a photo [3]. They are interested in coverage of any outdoor place and this can contribute to a system that represents the world with high level of detail [2]. Most of the "intelligence" of image processing is done on the server side using Big data technologies and computer vision, making the data collection super simple for the user. As a result, Mapillary will improve with each new photo since all new photos are related to any existing photos in the vicinity. Here is a short presentation [5] for a brief technical overview. The idea is that the users of the data are empowered to increase coverage in areas that interest them [3]. The developers of Mapillary believe there is a place in the market for a provider of neutral and independent pictures [3][4]

The contributors can install the Mapillary app on WindowsPhone, Android or iPhone, there are successful reports from even Jolla and Blackberry devices that can run Android apps. After registration, the user can start taking photos. In addition to supporting numerous smartphones and action cameras, Mapillary also offers a Mapillary-specific version of the BlackVue DR900 dashcam, the BlackVue DR900M.[6][7][8][9]

At developer resources, the JSON API is documented, including an embeddable Widget.

OSMers can contribute to Mapillary in a number of ways. The most popular method is with a smartphone using the Mapillary app which is actively developed for Android and iOS. An open-source Windows app is also available. Other camera devices can also be used as long as accompanying GPS data is recorded. Photos taken outside the apps can be contributed using their scripts .

For more information on using Mapillary, take a look at

Mapillary uses computer vision to recognize map features (objects) from the images, ranging from traffic signs to more experimental object and line recognition. The experimental features are based on semantic segmentation.

Traffic signs convey important information about road restrictions and junction layouts, and are mapped on OpenStreetMap using the traffic_sign=* key.

Mapillary first introduced automatic traffic sign recognition in January 2015, and about a month later launched a system for manual validation of these recognition results, in the form of a game (currently doesn't work). This feedback led to improved automated recognition results, which were further improved by using country-specific models, and later worldwide appearance groups to cover more countries using a single model. These appearance groups are documented here. A full list of supported countries can be found here.

The recognized signs are available as a data layer within the iD editor, which can be used to assist in editing the map. The data layer contains precise locations and types of traffic signs. It is also possible to export the data as a file from the Mapillary platform. 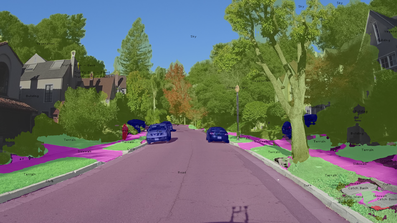 Mapillary has also started processing photos to understand the scene and a wider variety of objects within it at pixel level. This is achieved using deep learning which teaches the computer to identify scenes and objects, by comparing them to existing scenes and objects the computer has been shown. This led to the creation of the Mapillary Vistas dataset which includes 25,000 human annotated images which can be used to improve these algorithms. This data is not yet available in OSM editors but can be used when contributing to OSM.

As of August 2018, Mapillary has moved this feature to "beta". It provides an online interface for exploring recognized features, e.g. crosswalks, barriers, and traffic lights (full list). Unlike traffic signs, these features do not have their precise location determined by triangulation. Some "linear" features such as sidewalks are additionally matched against the OSM road map to generate line features, although these are usually not useful for mapping.

Use in OSM editors

You can easily use Mapillary photos directly when editing in OSM editors (see also #License):

Mapillary supports a range of OSM initiatives including SotM conferences, Maptime meetups and humanitarian projects. Through a partnership with Humanitarian OpenStreetMap, Mapillary provides equipment and technical support for projects that are actively contributing OpenStreetMap. Reach out to Mapillary to find out what support may be available for your initiative.

Mounts to support your phone in the car are also provided free of charge to help you take photos of areas that you want to edit in OSM. Request mounts here to request yours.

The details of the car mounts, bike ( bicycle ) mounts and the battery packs can be found here.

The images on Mapillary can be used under Creative Commons Attribution-ShareAlike 4.0 International License (CC-BY-SA).[10] There is special permission to derive data from the photos for contributing to OpenStreetMap. The GPX tracks can be used without restriction. The license was changed on 29 April 2014 from CC-BY-NC to CC-BY-SA. [11]

By using Mapillary contributors also grant Mapillary a worldwide, perpetual, and transferable license to use the photos and other content for commercial purposes. [10]