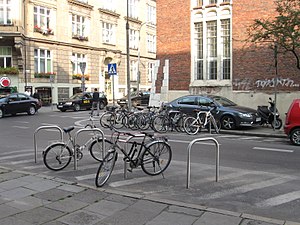 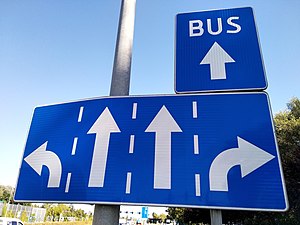 One of photos taken and uploaded to Wikimedia Commons as illustration for OSM Wiki. Used on Key:turn:bus:lanes. It was taken solely for purposes of improving OSM Wiki, but is one of types of images welcome at Wikimedia Commons, and anyone else also may use it.

Wikimedia Commons (commons.wikimedia.org) is one of the platforms within the Wikimedia family of projects, which includes Wikipedia, Wikidata, Wikivoyage, MediaWiki (the software on which all these projects run, as does the OpenStreetMap wiki) and other projects. It hosts most of the images, videos, audio and other media files used across Wikimedia projects, and these files can be directly used also for example on this wiki. Note that Commons content furthermore may be used by anyone, anywhere and for any purpose [2].

Wikimedia Commons hosts a lot of photos of more or less noteworthy physical objects everywhere (buildings and all kinds of structures, shops, trees, artwork, memorials, signs, parks etc), which may never actually be used in Wikipedias etc, but can hold information valuable to OpenStreetMap mappers (in the image itself or in its metainfo). As such contributing photos to it can also be worthwhile for OSM contributors as well as linking to those photos from OSM objects. For being eligible for hosting on Commons, photos just need to be "realistically useful for an educational purpose", which will hold true for many photos of interest to OSM, and be freely licensed or public domain.

Commons' project scope is very wide, and it is interpreted to include images of bicycle parking that are not noteworthy in any way.

If you take an individual photograph during field surveying that has anything distinguishing about it, even just a clear shot of some street furniture, consider uploading it to Wikimedia Commons, then make it discoverable by data consumers and other mappers:

Mapillary and OpenStreetCam photos are available under a license compatible with Wikimedia Commons. If you notice a photo in either site that does a good job of illustrating some place or structure, you can manually export that photo and upload it to Commons to make it accessible to a wider range of use cases. The Mapillary 2 Commons tool can be helpful to import Mapillary images to Commons.

Wikimedia Commons photos can be useful for map mashups. For example, Sophox displays an image gallery or an interactive map featuring images in popups whenever one of the output columns contains Commons files. A user can click on an OpenStreetMap feature to see more detail about the feature, including a photo of it.

Commons hosts freely licensed, patent-unencumbered 3D models. A data consumer can discover these models through either wikimedia_commons=* or wikidata=* in conjunction with the 3D model (P4896) property at Wikidata. For example, this Sophox query shows Creative Commons–licensed 3D models corresponding to OSM features (some public domain models are also available).

Most of the 3D models at Commons are intended for 3D printing, so they may be suitable for 3D printing OSM data. However, each model requires some individual attention to scale, orientation, and textures to ensure consistency with a broader map, whether 3D-printed or displayed on screen. By contrast, the 3D Model Repository (3dmr=*) has fewer models overall, but all the models are intended for 3D map rendering.

The Standard tile layer is suitably licensed for inclusion in Wikimedia Commons. If you want to illustrate a Wikipedia or Wikivoyage article using a static map (as opposed to an interactive map), use the Export panel at openstreetmap.org to export an image in SVG or PNG format, then upload it to Commons. Tag the image with the {{OpenStreetMap}} template to indicate its source and license status.

Images can also be uploaded from Android devices, using the Commons mobile app.

Commons as a source for mapping

Most licenses used by Commons images do not allow them to be used for mapping.

How to find images for a place

Embedding media on this wiki

Pages on this wiki can automatically obtain images from Wikimedia Commons as if they were uploaded here. As long as a media file is available under a license compatible with Commons, you should upload it to Commons instead of using the Special:Upload tool here. There is no need to reupload a Commons image here.

Consult the MediaWiki images documentation for the syntax for inserting an image or gallery of images on a page at this wiki.

While it is possible to upload files to OSM Wiki, Wikimedia Commons should be preferred if possible