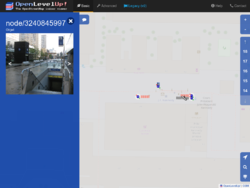 Photo linking is a technique consisting in creating links between OSM features and external pictures. The goal of this is to make OSM data illustrated and sourced by recent pictures.

In order to make more user-friendly maps, it is interesting to illustrate our rich point of interest database with pictures, as other map providers already do. By populating the database with this kind of links, we allow developers to create easily visual maps for everyone.

Links to images are not just (potentially) useful to end users, but can also really help other mappers understand the objects we have mapped. Often experienced armchair mappers trying to validate edits can do nothing but trust that the previous mapper got it at least somewhat "right" and complete. With images attached they can often do more than that.

It matters to make the links explicit, because it allows to choose a good picture between a set of available pictures, and also make sure that the feature to illustrate is well visible on it. It could not be done properly only using nearest, more recent picture, as it could be blurry, not in the right direction, and so on.

Creating a link between an object and its picture in OSM is easy: just add the tag according to your picture source on the given object. See below to find how to associate picture according to its source.

To find easily nice pictures to associate on given OpenStreetMap objects, you can have a look at Pic4Carto, which is a tool for making contributions using open-licensed pictures. If you browse area near your POI, you will eventually find good pictures of it.

You can use any OpenStreetMap editor to add pictures tags on objects. However, there are a few dedicated editors to do so.