My real name is Odd Gustafsson and I live in Sweden. I found OSM 2009 but decided to not engage until end of 2011, because of our second childs birth. I've been interested in maps since I was a child and made maps of Europe when I was in primary school, I also enjoyed compiling useless data at very early age, so OSM couldn't be a more suitable project to get involved in. 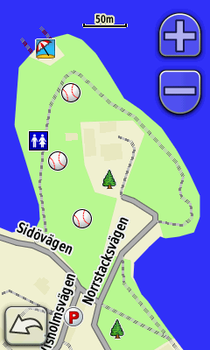 I live in a quite small (and quickly mapped) town, but I love mapping out in the countryside. I've found preparing with Bing and later confirming the area with GPS and smartphone to be a very good way to work.

I use a iPhone 3GS (even if I prefer open standards) and a Garmin Oregon 550. I used a eTrex Vista before that, but found the Oregon to be better in woody areas. (Well, mostly I carry both of them).

Though I couldn't recommend anyone to get the Oregon 550, you should probably go for the 450 instead. The most noteable difference is that 550 has a camera. But to bring it up and save it as a waypoint takes 10-15 seconds and sometimes you need to remove your gloves. The image quality isn't too bad, but I would suggest to use a normal camera instead and plugin to JOSM.

I am a self taught programmer and database nerd, I haven't fiddled around with the "new" stuff like python and ruby but feel comfortable with most languages.

My Father is a retired Postman and seriously interested in Toponymy, so he is a GREAT resource when mapping, he told me the funny origin of Torpenhow Hill when I was younger.

When I caught the sense of OSM it really challenged me as a person, away from standards and central administrations. I find this to be very exciting and looking forward to see the evolution of it and be part of shaping it. So:

But I do spend time listen to what other people think, otherwise you cannot evolve.