I'm Henk Hoff, I live in Assen (in the nothern part of the Netherlands)

You can mail me at toffehoff (at) gmail (dot) com or at henk.hoff (at) osmfoundation (dot) org.

Or skype me (id: toffehoff) 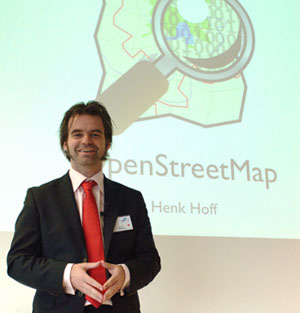 I got involved in OpenStreetMap in April 2007. After finding Richard van der Weerd via the mailinglist, we joined forces and completed the map of Assen in June 2007. (the main credit for completing the city must go to Richard). However, the AND-donation got me really started. This was *the* opportunity for OSM to set itself on the map in the (open) geoworld.

I am still mapping occassionally (e.g. new residential areas), but spent most of my time for OSM to "spread the word": representing OSM at seminars etc, giving talks, etc. And trying to find opportunities for organisations to use OSM data.

In my working life I am a freelance internet consultant. I need to get my bills paid somehow ;-) Besides that I was also member of city council in my hometown Assen from April 2002 until March 2010.

In the past year as part of the OSMF board I've spend most time on the State of the Map and the License Working Group. Realizing that there is only a limited amount of time, I would like to focus on the following:

Further, I will support the following:

I'm currently a board member of the OpenStreetMap Foundation.

My reason to apply for board membership:

I am currently helping out the Foundation by drafting a proposal for OSM merchandising. To me, merchandising is in more than one way good for OSM. Not only for the obvious reason of potential funding of the organisation, but also as a promotion tool and to strengthen our community. This is a good example of the Foundation's role: facilitating the community. E.g. generating promotional "noise" and providing the means to get things going. I'm looking forward to do some more work within the Foundation to make OSM the premiere choice for getting (free) geodata.

Besides trying to keep my hometown up-to-date, I've focussed most of my mapping elsewhere. The following places have my special interest.

These are all places I have visited or where I've lived and has left a lasting impression on me.