My OSM username is "Vid the Kid". I live on the far west side of Columbus. (Which Columbus, you say? The big one, duh!) I'm a "roadgeek", and I've studied and drawn maps for as long as I can remember. As @vidthekid, I may tweet about OSM.

This page is not revised frequently, and revisions are usually only to parts. As a result, some portions of the sections below may no longer reflect my current opinions, concerns, or priorities.

At the moment, I'm primarily concerned with cleaning up the map around Columbus. Typically, I'll restrict myself to the following counties in Ohio: Delaware, Fairfield, Franklin, Licking, Madison, Pickaway, and Union. However, I won't be shy about fixing up major transportation corridors outside of this territory which I've traveled multiple times. Sometimes I'll also make minor spot edits outside of my home territory if the map doesn't match my experience.

Recent Change to my Habits Regarding ref

I have recently begun to prefer the shorter style of ref values for state routes — that is, "SR xx" rather than "US:OH xx" — especially when a route relation is present. Furthermore, where multiple routes overlap, I've begun using another abbreviated system, which might look like this: ref="US 23-33". If routes of different classes (Interstate, US, state) share the same way, only the route(s) of the highest class are listed in the ref tag. The result is shorter labels that are more likely to be rendered/legible on the web maps, less confusing in text directions, and likely closer to how people actually refer to the road. Any renderers or routing engines that are aware of route relations can make use of the more detailed information provided by such relations. I typically only use this combination approach where route relations are present or planned, so information about individual routes is not lost. 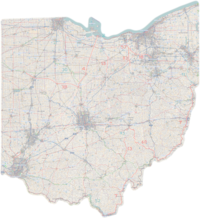 An example of which state routes might be promoted to primary

I'm now experimenting with promoting some "good connecting roads" to highway=secondary. There seems to be pressure in the OSM community to use Primary and Secondary a bit more liberally than simply US and State routes, respectively, as the TIGER import did. After a bit of thought, I can think of some situations where this might make sense. So I'm going to try promoting a few key roads, to set an example that isn't overkill. Promoting some major state routes to highway=primary is also on my radar. I still intend to leave most state routes as highway=secondary and most county roads as highway=tertiary/unclassified/residential.

I have noticed in many American cities, there seems to be a tendency to make anything that's not a quiet neighborhood street into highway=secondary or higher. Additionally, there seems to be little effort to even produce a map with secondary and primary networks that make sense. And, usually, there's not a tertiary road to be found. Yes, mappers, there is a step between residential and secondary; it's called tertiary. I took a look at Toledo tonight and wanted to cry. As of this 2009 October 21, it's a jumbled, random-looking mess of primary and secondary roads, and I can't infer from that any sensible concept of how the roads function. Generally speaking, at least half of those secondary roads should be tertiary. And half of those primary roads should be secondary. Chicago is similarly excessive with secondary, and to a lesser extent, primary. I'm sure there are other places with this syndrome.

The way I see things, in an urban context, tertiary roads are the roads you use to get around within a community. Secondary roads take you across town, from community to community (or to nearby small cities and towns that aren't part of the big city). Primary roads are the main routes between medium and large cities. These primary roads extend into the heart of the city to meet other primary roads coming in from other directions. Of course, freeways and expressways should be motorway and trunk.

The highways converted from TIGER around Dayton are atrocious and need to be redrawn. The Yahoo! aerial imagery may be outdated for some interchanges. Also, it appears that every single node in a region east of Dayton has been duplicated, making a mess of things.

Most interchanges imported from TIGER may look decent, but are probably not very router friendly. In order to support reliable routing in the United States, every freeway interchange needs to be checked for correct directionality and topology.

I've been working on county borders. I have a rather efficient process. I work on one border at a time — for example, the Marion–Morrow border. Starting at one end and working my way along, I do a number of things. First, I draw a new way, connecting the points where the TIGER-imported roads from either side meet. This results in a county boundary that's a bit more precise than the USGS-imported boundaries, and in better agreement with the aerial imagery. This new way is added to the boundary relations for the counties on either side. If one of the counties involved doesn't already have a boundary relation, I create it. I also make sure that where the boundary crosses roads, the boundary and the roads from each side come together at a single node. (This I call TIGER stitching or TIGER welding, and it makes it possible for routing programs to find a path from one county to the next.) While looking at a smaller-scale map in another browser tab, I decide which roads crossing the county border should be tertiary, and which should be unclassified, and I tag accordingly. Generally, it's the roads that form "shortcuts" between towns that get upgraded to tertiary. I can come back to define the network of tertiary roads for the interior of a county later, since that's often easier to do when the tertiary roads across county lines have already been chosen. For state, US, and Interstate routes that cross the boundary, I make sure they have the proper ref tag, and I might add them to their route relations if such relations have been started. Where a road goes along a county boundary, it's usually there twice. I decide which one to keep, and then delete the other. Then I make sure all the roads that were connected to the road I deleted, get connected to its counterpart from the other county. And then I tag the road as a boundary, usually by using the "repeat tags" button to copy the tags from the boundary way I've been drawing. Of course, as part of this process, I also perform other simple cleanup tasks where I see them. I can usually knock out a rural county border in about an hour or less. Finally, when this process has been completed for all of a particular county's borders, I delete the USGS-imported boundary way for that county.

Just because I've got the process down, doesn't mean I don't need help. The whole country can benefit from this process. There are hundreds of county borders in Ohio alone, and I still have other things on my to-do list. User:Minh Nguyen is working on county boundaries too, though his process is a bit different. Anyway, there's much to be done here!

Numerous ways with "bridge=yes" for no reason. Several gaps in roads. Fixed in one marathon editing session.

Much recent development and new streets to map. Potentially, a few roads which no longer exist and need to be removed.

There are some concepts I'd like to propose, but I have yet to put them down on virtual paper:

In addition to updating OpenStreetMap's database, I also contribute to the development of OSM tools by pointing out needed improvements to developers. I don't just point out problems, though — I usually outline specific solutions, sometimes even contributing code. Check out this list of issues I've reported that have been fixed.