WhereCamp (wherecamp.org) is a conference of GeoIT enthusiasts. It was at the beginning a recurring geo unconference event. It originally followed on from the massive annual geo conference Where2.0 and originally involved sleeping over (hence "camp"). The only remaining edition is the GeoIT Wherecamp Conference in Berlin (2012-2018). 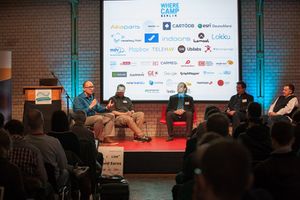 It's an "unconference" because the agenda is agreed on the day in a freeform ad hoc kind of way, with people posting up their ideas and running sessions (talks, discussion, workshops) This works better than you might expect! This unconference style works very well in a timeframe of massive change like 2008-2014 with the introduction of Mobile Computing. Individuals pushing forward to show new applications. After a time with the growth of the IT/GeoIT platform more and more larger teams work on the growing application. Therefore a more organized conference style with a Call for Participation, an agenda and more, is required and demanded.

Other people adopted the idea and the name, and ran wherecamps elsewhere for people that couldn't make it to the big Where2.0 conference. This includes... WhereCamp.EU - a set of events based in Europe which have quite heavily featured OpenStreetMap, and been organised by some OSMers. See the WhereCamp.EU page for details.

Currently only the Wherecamp Berlin is known and scheduled for 2018 on October 24th. 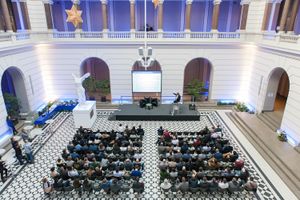 Opening of the 7th GeoIT Wherecamp Conference 2017 with Hinrich Claussen
Retrieved from "https://wiki.openstreetmap.org/w/index.php?title=WhereCamp&oldid=1613752"