See the cake diagrams and completion table here, which covers Wolverhampton along with other parts of the Black Country.

Feel free to report anything you notice that is wrong or incomplete. This should help those able to do so to check and improve relevant sections.

Several Wolves LUG members got together to map the city centre inside the ringroad.

At the end of LUGRadio Live, twelve people went out to map as much as they could between 17:00 and 18:00. Three people in cars, one on bike, the rest walked. Areas concentrated on were just outside the ringroad, although some surveyed where there were known to be errors inside the ringroad. See the traces. 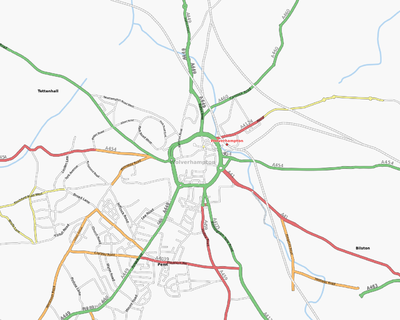 See the Mappa_Mercia page to find out what's being mapped in the Wolverhampton area. Join the Mappa Mercia OSM user group today!

Feel free to add yourself to this list if you are active in or near Wolverhampton: