From OpenStreetMap Wiki
< AND Data
Jump to navigation Jump to search

Copied from the wikified AND_Data/Spec on 10. July. Please update any later changes of the AND Specification to this document.

The first part of this document discusses the major differences of those tagging schemes. Here we collect all items which may impact OSMs current tagging scheme, these may additional tags or even changes to the current tagging scheme. Feel free to include any other differences worth being considered. At a later point of time it will be needed to officially propose new features or generate corresponding feature change requests (see Proposed features).

The second part of this document describes the mapping of ANDs tags to OSMs tags in detail. Use the "discussion" tab to suggest new or better tags.

Major differences in AND and OSM Tagging scheme

AND provides information for maneuvers for navigation. OSM has no such information and prefers generating navigation data from the OSM database using some kind of transformation. Any information currently missing in the database (such as turn restrictions, etc.) is expected to be added to the database at some time in the future. Currently, a feasible editor concept is missing for such data.

While it is unlikely that OSM with overtake AND's maneuver concept, we are interested in learning more about this concept from AND:

AND has implemented maneuvers as a relation between a "from" segment, a "via" node and again a "to" segment. The node is necessary in case of U-turn restrictions, where the "from" and "to" segments are the same. This approach has been chosen with route planning in mind.

When mapping AND data to OSM, each AND Segments should be represented by one or more OSM Segments plus an OSM Way. However OSM does not tag the Segment, but the Way. In a next step OSM Ways that are directly connected to each other and that carry exactly the identical set of attributes and point to the same direction could become merged to a single way. This process could be made manually or automatically.

Update: AND's shape files do actually contain shapes made up of multiple segments. These shapes are (mostly) converted one-to-one to OSM ways. These ways are however split at unfortunate positions such as landuse-boundaries. In several cases this means that for example house number information is duplicated, there may be multiple shapes with the same road name and house number range (see RD_OTHER below).

These are corresponding with OSM Areas.

These are corresponding with OSM Areas.

These are the files that contain the AND boundaries. The mapping to OSM for the boundaries can be found in the table https://wiki.openstreetmap.org/index.php/AND_Data/AND-tag-mapping-to-OSM#Boundary_files_-.3E_mapped_to_OSM_Areas

Associated with the province boundary layer, there are four comma-separated "*.lst" files:

Administrative divisions in the data

The number of hierarchical divisions that occur is country-specific. All countries receive the lowest or most detailed administrative division, i.e., the "Province".

The term "Province" is used here and refers to the most detailed level of administrative division represented by AND within a country. Due to the large variation in use of this term between countries, it does not always indicate actual provinces as described within a country in its administrative hierarchy. The same is true for the terms "Region" and "State".

Currently, a maximum of three administrative levels (below country level) exists in AND's Global Road Data. For the purpose of this document the most detailed level will be described as the "Province", the level above this as the "Region" and the one above this as the "State" division.

Administrative Division Hierarchy in AND Data

The provision of province, region, state and country information in the AND data varies between and within datasets as the following table illustrates:

These are corresponding with OSM Areas. Does OSM have own boundary data to be used instead?

All "*.lst" files, except _c.lst, have a corresponding "*.num" file that give a total count of the administrative divisions per country.

The format of the "*.num" files is as follows:

Description of the *.lst files

Administrative boundary information in AND data is supplied as a graphical province boundary file and one or more accompanying "*.lst" files.

The following tables describe the field structure of the "*.lst" files at each administrative level:

Apart from the <dataset>_c.lst file at country level, the province or "<dataset>_p.lst" file is the only file that can be directly associated with the graphical province boundaries.

This can be used to match the boundaries to their corresponding entry in the <dataset>_p.lst file.

The <dataset>_r.lst file and <dataset>_s.lst file are not directly linked with the graphical data. Instead they provide extra information on the region or state in which each province resides.

The associated region and state for each province is identified in a "region code" and "state code" field in the <dataset>_p.lst file. The process by which region or state information can be retrieved and linked to the graphical data is described in the next section.

Linking and mapping all administrative data

The country or <dataset>_c.lst file can be linked to all other *.lst files as follows:

The following example shows how these links can be used to map all administrative information to the province boundary layer.

In Switzerland, there are 2 hierarchical administrative divisions (below Country) – province and region. There is the AND province boundary data, a <dataset>_p.lst file, a <dataset>_r.lst file and a <dataset>_c.lst file. 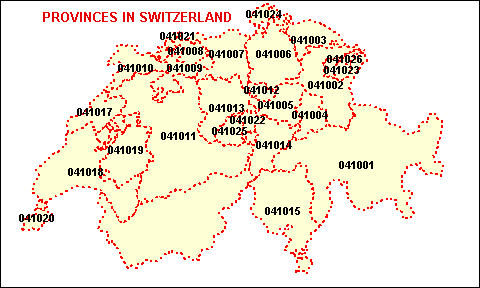 The purpose of the alias file is to provide alternative names for named nodes addressable on the administrative level, e.g., cities.

The names are stored in a *.csv format using the following structure: