The 2005 address data for Fulton County, Georgia is in a semi-public domain (see licensing below). In addition, the 2005 building data from Fulton County GIS has no use restrictions other than reading the liability statement. The plan is to import this data into OpenStreetMap. The objective of this is to add address data and building data for Fulton County into OpenStreetMap. Only addresses that do not already exist in OpenStreetMap and that meet the conditions and buildings that don't touch existing buildings or touch other buildings in the dataset itself will be imported.

For the address dataset, the PDF file provided with the data states "Freely use, copy and distribute as long as credit is given". The metadata information that is on the main download page states no access restrictions, but includes the standard disclaimer for GIS data in the use restrictions. Below is the actual text:

DATA Disclaimer: Fulton County makes known to user, and user acknowledges notice by Fulton County that this Data contains known errors and inconsistencies. Fulton County in no way ensures, represents or warrants the accuracy and/or reliabilibity for any purpose.

For the building dataset, in an email with Steve Williams, it was said that "Fulton County has no objections to the incorporation of our publicly distributed data into OpenStreetMap."

The data is in a shapefile, which consists of 328,528 address points. However, because of how the Georgia GIS stores the address data, some addresses are duplicated to show the access point and the building itself. As a result, there are (at least) 296,458 unique addresses.

The shapefile was converted to OSM XML using ogr2osm. The projection was correctly detected automatically as the Georgia West projection.

NOTE: After the conversion process, opening it in JOSM yields only 321,528 nodes (which was confirmed by using grep to detect the start of the node tags), whereas QGIS and the dbf file (opened in LibreOffice Calc) states that there are 328,528 nodes.

The tags in the shapefile are as follows (bolded tags are tags planned to be used in the conversion process):

This data is also in a shapefile, and was converted to OSM XML using the OpenData plugin in JOSM. However, the resulting file was about 600 MB. Therefore, a splitter program was used to divide up the OSM XML into several files having no more than 750,000 nodes in each file. This produced 8 files, with the largest being 105 MB.

The tags in the shapefile are as follows:

The LUCDesc tag will be used to add a building/amenity tag describing what it is. If the tag cannot be used, then the building will only have the tag building=yes.

The OSM change file will contain additions of addresses and buildings and modifications of building (where address data is added) and the additions will have negative IDs.

One issue regarding address number ranges was brought up above.

Another issue is that some amenities and buildings already have address information, and so adding the data from here as well will result in duplicates. If it is assumed that the existing address data is either just as accurate or more accurate than this data set, then the program could check to see if there is a point with the same address number and street name. If it finds one, then the address is skipped.

Another issue is that there may have been smaller address imports in Atlanta. The same guideline as above could apply here.

Many of the buildings in the dataset have unnecessary nodes where there is no change in the angle (it's a straight line). These nodes will be removed from the building. 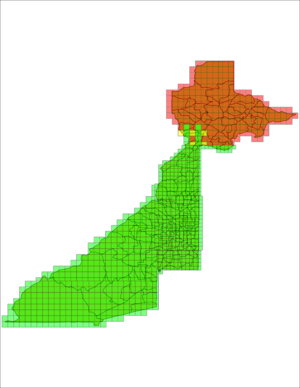 The import will begin in the city of Atlanta, which is the largest city in Fulton County, and will extend north and southwest. The account used for the import is Saikrishna_FultonCountyImport.

Update 4/22/2014: Much of Atlanta has been done. The import will soon expand into the southwest and the north.

Update 6/11/2014: Nearly all of Fulton County has been completed. Some preliminary visual analysis of the results shows that there is some manual data cleaning which is necessary. See the Manual Data Cleaning section below for more details on the issues which have been identified and plans for how they can be remedied.

In the case of a future update, the address number and street can be used to match up addresses in OSM and the new dataset. A separate ID is not planned to be stored.

Data issues which have been identified as a result of this import. 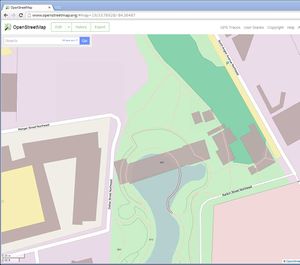 Looking at the Old Fourth Ward Park in Atlanta, it was discovered that a building footprint has been added during the import which is erroneous. This area has been recently redeveloped (circa 2012) into a park with a large water retention pond, and these features have been added to the map. The solution is to edit OSM and delete the erroneous building footprints. 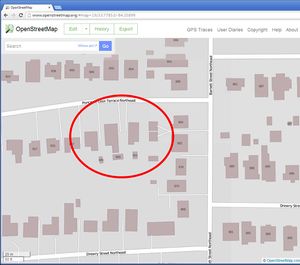 In residential areas, some address tags have been assigned to small outbuildings (e.g. garages or sheds), but not to the main house structure. The solution is to start and editing session in OSM, and add the address information to the house building feature's address tag.