Four of us turned up. It was reasonably wet but just dry enough. Four pieces of cake got mapped. We met up and ate at Café Citrus. There are no photos.

Thanks to everyone who came.

Please note: The party was postponed from its original date because of unfavourable weather forecasts. The party will now happen on Wednesday 26 November 2008. If it rains, we'll regroup indoors.

Mapping parties provide a way for existing OSM contributors to:

There are some famous precedents, mostly in London I think. Brisbane is also a famous world city, so surely we can also hope to reach these heights ;~) (Incidentally the Londoners will be meeting in a pub approximately 10 hours earlier on the same day. We could've raised glasses together over some kind of video link if it wasn't for those time differences!)

(We decided on the original date after a brief wikivote.)

Update to the update: definite postponement

The party is postponed for one week because the weather forecast is for likely storms and almost certainly heavy rain. Toasted mappers or soggy maps at best. The new date is Wednesday November 26. I hope we can keep the same turnout.

Those who came to the last party have the prerogative to decide where the next one should be. We decided that Bulimba was under-mapped.

Bulimba is connected by ferry, bus, and road.

The cinema website says (paraphrasing, not wanting to link because of The Other Map):

"For buses to the Balmoral Cineplex you need to take one that sets down on Oxford Street, Bulimba and get off near "Oxford 152". Alternately you can get off next to the "TAB" and Library on Riding Road and take the two minute walk down Oxford Street."

It goes on to suggest you check this carefully with transinfo. Sage advice.

CityCat(TM) Ferries are possibly the easiest mode from the city.

Please note: Services are currently suspended in the evening because of debris in the river from storms last week. It's unclear if the scheduled timetable is in operation. Apparently the last service will leave Riverside at 6pm in the direction of Bulimba.

(Normally) they leave Gardens Point QUT ferry stop at only:

Actually, the website seems to be saying that only Shuttle buses are servicing Gardens Point and North Quay. Probably best to walk to Riverside

(Normally) more frequently, they leave from Riverside at:

These services would arrive at Bulimba at:

That's possibly even less readable than the council's own timetable. I'm clearly not some kind of timetable translating service. Why am I telling you when you can find out for yourself? (warning: may contain traces of maps).

We'll meet outside the Balmoral Cinema, 162 Oxford Street, Bulimba. This is apparently in the block between between Wambool and Pine Streets. Directly across the street is the Citrus Cafe, and beside that is a church hall, then the church (heading east). Map below, with marker.

Recommendations welcome. As long as we don't end up at a fast food joint.

Does Oxford street actually have any fast-food joints? :) From memory, open on week nights (I haven't been there for a while, though):
Citrus Cafe - On the South side of Oxford, one block east of the park, indoor and sidewalk seating
About opposite the park there is a Turkish Restaurant (Ahmets?)
Somewhere near it there is a nightclub/pub, I forget exactly where. There are a bunch of other restaurants, as well. Some of them are quite upmarket. 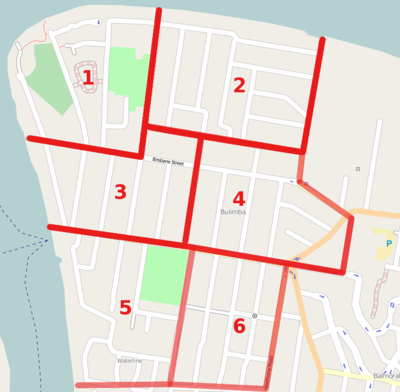 Bulimba cake diagram, edit this section to grab one!

Choose a slice from the cake diagram so we don't get too much duplication of effort. If we run out of slices we'll make more. Put your name after the list if this happens.

If adding your name here to RSVP is too scary, use the contact details below and I will add you myself.