Facebook has been running a project to perform AI-Assisted Road Tracing within OpenStreetMap. This has been an ongoing effort since 2017 and has included, Thailand, Indonesia, Malaysia, Vietnam, India, and Tanzania.

In 2016, Facebook started researching how various machine learning algorithms could be integrated into a mapping workflow. At State of the Map 2016, Facebook shared initial results on how one could use AI and new mapping techniques, such as advanced deep neural net models, to detect roads from satellite imagery. In 2017, the team initially mapped Thailand and Indonesia using an internal fork of iD designed to work with AI data. In 2019, this version of iD was further refined and made available to the public for worldwide AI assisted mapping as RapiD. In early 2020, a JOSM plugin for using Map With AI data was also released.

Our goal is to collaborate with the OpenStreetMap community to create quality road data, validated by trained mappers and local OSM communities. Please send questions to osm@fb.com.

For more information on the project please also check out Mapwith.ai and the github page

Partnering with the local OSM communities, the pilot mapping countries were Thailand followed by Indonesia. They chose these countries because of their relative low road coverage on OSM.

We added missing roads to area around the city of Leogane at the request of MotoMeds Haiti.

In addition to the mapping projects controlled by Facebook and collaborators, the road data can also be used by anyone else using RapiD and JOSM's MapWithAI plugin. The tagging by default follows #Element Tags. The changesets themselves may be a bit harder to recognize as they are often untagged: for RapiD you can look for the editor info, for the JOSM plugin I have no idea.

In general, the road data is quite handy for tracing neighborhood service roads and unnamed rural roads. See #Quality and #Mapping Process for what to watch out for when using MapWithAI on your own.

The publicly available Maxar Premium layer in iD, RapiD, and JOSM is essentially what is used in the creation of our road predictions. However, this layer is constantly being updated while our predictions are only rerun occasionally, so they may fall out of date with what is being displayed. If our predicted roads appear to be very out of date, feel free to reach out and we can prioritize a rerun. 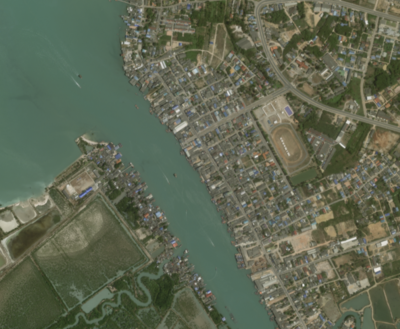 Currently, Facebook is only directly generating and mapping AI roads, although other data sets such as Microsoft's AI building footprints are available in RapiD. We use the latest deep learning algorithms to assist road extraction and mapping. Here is an example of a prediction using deep learning for an area in Egypt. Initial, predictions are in a raster (image) format rather than a vector format suitable for mapping. 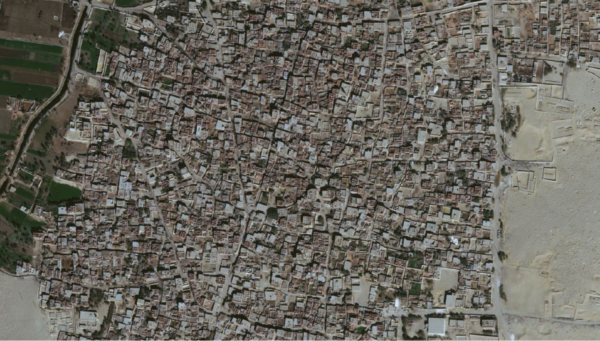 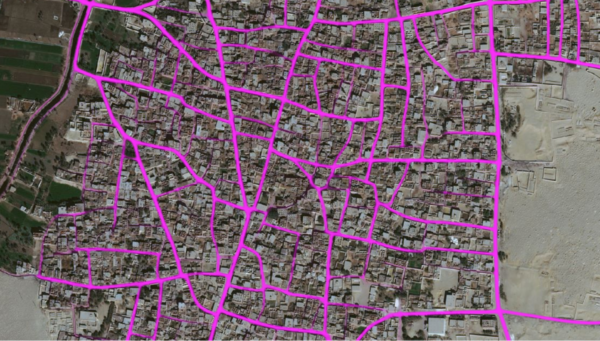 Once an area is predicted, we vectorize the data into lines and then conflate it with OSM. This removes any road already mapped, adds connections, and suggested tags. 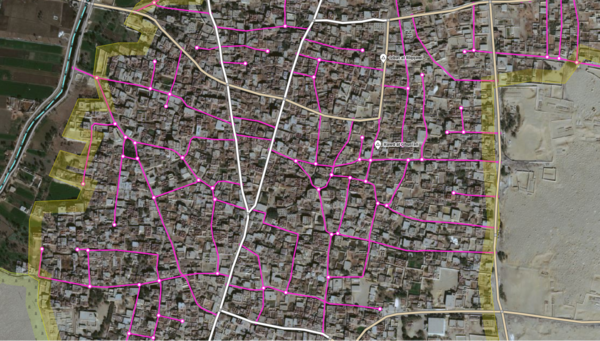 During the submission process, our mappers will assign and fix road types according to the general highway tag guidelines of OSM http://wiki.openstreetmap.org/wiki/Key:highway

Before moving to a new location, we will work with mappers from local OSM community in each country to verify our highway tagging method and make sure they align with local conventions.

Some other methods we use to tag roads include:

We currently use the following tagging format for changesets:

The 'source' tag indicates that road geometries are based on Maxar satellite imagery.

The mapping process consists of the following steps summarized in the image below.

The map editing team consists of Mappers and Validators, and their accounts are listed as below. Among the skills required:

Our accounts follow recognizable patterns to make it simple to identify our mappers. VLD just stands for validator and RVR for reviewer which were terms we used early on and have stuck with for consistency.

Visit Organised_Editing/Activities/Facebook#Mapping_Team for an up to date list of mappers.

What does AI mean?
Artificial Intelligence (AI) is training a computer to do things that require intelligence when done by humans. In this case it involves creating training data for an area by tracing out satellite imagery the same way you would when editing and feeding it to a computer. The output of this is road masks.

Are there limitations with AI?
Yes, AI and algorithms still have a long way to go to figure things such as assigning tags according to OSM region specific guidelines, figure out the correct OSM relation, add bridges over waterbodies or figure out connections with crossing railways among many other things. Currently all of this is done by our mappers manually.

Are you adding roads directly to OSM without humans validating?
Every single road from the AI output will be added only if a a mapper chooses to add it to the map. This ensures that every way is inspected by a human and corrections will be made to geometry or tagging before uploading to live OSM.

What Imagery are you using?
We are using Maxar's Vivid+ which is high-resolution (50cm / pixel, or zoom 18) color-corrected and cloud-free

Can you share Maxar imagery?
Our imagery is very similar to the Maxar Premium imagery available in iD and JOSM.

Is the Imagery free of Cloud Cover?
The intended output of +Vivid is cloud free, and in most cases, Maxar meets this. There are some highly cloudy parts of the world where it’s unavoidable. On average though, this product maintains less than 1% cloud cover.

Who is behind osm@fb.com?
Most of our engineering team and QA team are behind this email. This helps us collaborate as a team and is the most efficient way for everyone to be on the same page. More people also ensures that no emails are missed.

Can you Publish Source Code for ML?
We cannot share the source code for Machine Learning at this time, but we can and will share our internal tools.

Are you going to map other countries?
Yes. We have mapped several countries at this point, including Thailand, Indonesia, Malaysia, Vietnam, India, and Tanzania. In India and Tanzania we are taking a more targeted approach rather than mapping whole countries. This will allow us to expand our scope more quickly.

The road output has the following characteristics:

The building output from Microsoft may have occasionally false positives from waves or other bright natural features. As it is based on Bing instead of Maxar imagery, it is quite obvious when you are using Maxar.