From OpenStreetMap Wiki
Jump to navigation Jump to search
Key:fire path - Other languages

A fire path is an area kept clear of obstructions which would allow access in emergencies by fire-fighting vehicles, and other high-wheelbase vehicles with robust suspension. They differ from service roads designated for emergency vehicles in that they are usually not engineered as a highway.

In Britain they usually have distinct road markings preventing parking in front of the fire path, and may have additional measures to prevent other types of vehicles using the route (such as high profile paving blocks). Often installed in residential areas with an older pattern of streets where some have been blocked to reduce through traffic, or in Radburn layouts where such paths greatly reduce access time. In these cases there may be pedestrian and bicycle access alongside or within the fire path. 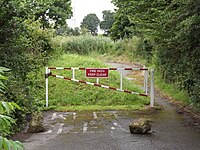 A typical fire path consists of the following elements:

In some cases an additional barrier, such as a lift gate may also be present.

In many cases when the fire path is clearly engineered as a highway, highway=service with service=emergency_access may be sufficient (see second example). In other cases, the accessibility is mainly enforced by ensuring obstructions are not present (see first example). The tag fire_path=yes can be used on the appropriate way to indicate this. Use existing signage to determine appropriate access tags: see the two examples.