Wikimedia servers after being racked at VISI.

Wikimedia donated 12 of their older Apache servers to OSM Foundation United States. The systems were almost all 2GB, 2x Opteron, 2x 250GB. They were all 1U in size. Using the parts from those systems Ian built three systems with 4x 250GB, 8GB. VISI donated 5U of server space for one year (starting Feb 1, 2010) to OSM United States. The three Wikimedia servers built above sit in these 5U. The systems are interconnected with a 1Gbit switch and have their own public-facing IP addresses. The uplink from this switch is 100Mbit with a 10Mbit commit. 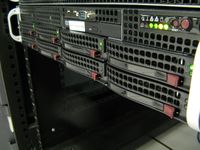 2U server sitting at OSUOSL.

Using funds donated to OpenStreetMap US we purchased a blazing fast 2U machine for US-community. It's currently sitting in a rack at Oregon State University's Open Source Lab.

Toluene holds a copy of NED, NHD, and other data that User:Ahlzen gathered.

Benzene holds an up-to-date osm2pgsql database and is rendering tiles using TileStache. This TileStache instance is also proxying imagery for various locations around the country.