Grab is a Singapore-based technology company that offers ride-hailing, ride-sharing and logistics services through its app in Singapore and neighbouring Southeast Asian countries.

They are a Gold Corporate Member of the OSM Foundation.

Grab would like to be part of the OSM community and help improve the map. Many places might not be accurate or identifiable on other forms of maps. Having these places improved by Grab will give richer information to OSM mapping contributors.

The primary focus of work is adding missing roads and adjust alignment thereby enhancing the existing data in OSM.

In some cases, the existing road network has been mapped incorrectly, meaning that some features are missing or may be in-accurately mapped. We plan to use a variety of imagery sources to help map the geometry more accurately.

We always monitor the feedback from local mappers as local knowledge always precedes.

Improvements that will be addressed include the following:

Here is the process followed by Grab data team while modelling roads.

The team's mapping projects are documented publicly in the Grab's Data Improvement Projects repository on GitHub.

Grab follows OSM's global and local policies, along with any other guidelines as appropriate.

Grab will also reach out to local OSM communities before beginning work, to gather feedback, suggestions and learn more about the data and tags used in that area.

Data sources and imagery we will use are listed here. Grab will research and use local tags and defer to local mappers, and also check the JOSM history on items to see why previous edits and changes were made.

The team will use JOSM for completing the task. JOSM has the OSM and Grab GPS traces (internal and non-downloadable file), and validation warnings for road networks and other possible issues that are important to prevent improper changes.

The team will provide changeset comments that are in compliance with OSM changeset guidelines.

With recent conversations with the Thailand community, the community and Grab data team is in consensus to repurpose import=* tag to import=grabremote to help the community differentiate between edits made by the Grab Data team.

Note: These edits are made using the traditional mapping process (there's no automation used), we are using an existing tag for easy maintenance and avoiding the creation of a new tag. 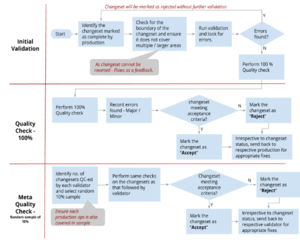 Different validators other than production ops will perform a quality check. Follow the same process as that of production, while validating 100% of changesets marked as complete. Record the errors found and segregate basis Major and Minor errors -

Grab will use various QA and data quality tools such as JOSM validation warnings and errors, as well as best practices on data quality from the OpenstreetMap Wiki page and LearnOSM.

Grab's data team contributes to OpenStreetMap's coverage of a number of Asian cities.[1] For any questions, please get in touch with Jinal Foflia or reach out to us on: geo.community@grab.com

Note: We are in the midst of updating this list, please look into Github for the updated list:

Below is a list of the team members supporting the mapping projects.

Here is the list of previous data team members who currently are not a part of Grab.

To support the Grab data team, Grab has a local map operations team across eight regions in South East Asia. This team comprises of individuals who help the Grab data team to get a better local context as well as support when there is a need for ground-truthing/verification. These teams also play a vital role in running multiple community activities and events across these regions. Here are the regions and their leads.

Note: We are in the midst of updating this list, please look into Github for the updated list:

Below is a list of the team members from the Map Operations teams.

In addition to the rules that apply to everyone in the community, here are the guidelines the Grab team reiterates and adds for themselves: 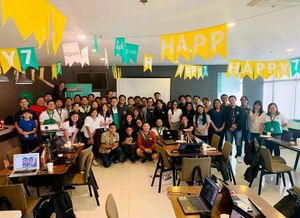 Grab runs and supports some community events & programmes in Southeast Asia, such as events like Mapathons, Map-a-Monday, Mapping Parties as well as participate in Humanitarian mapping efforts [2]

Geo*Stars is a programme for students to introduce them to OpenStreetMap, and Grab's Geo team, in Sept 2019, the programme was open for new applicants[3], but As of June 2022[update], that link is dead[4][5].

After data quality issues were identified[6] in Thailand, an entry has been created to track and document errors by Grab's mapping team. There's a clean up project in place that can be tracked in Github Issue 49.