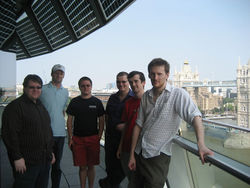 This is a Past Event. The hack weekend and government related technical workshop took place in London June 26th & 27th. 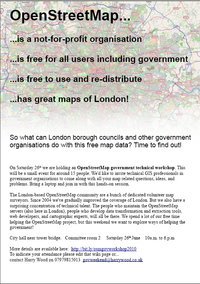 This event is being organised with the assistance of the Greater London Authority (specifically the good folks behind the London Datastore). They would like to help London's OpenStreetMap developers by providing a venue for a normal OpenStreetMap hack weekend but they're also interested in getting government involved.

On Saturday 26th the focus will be to experiment with ways in which technical people in government organisations can use OSM data, contribute data to OSM and begin to build useful relationships. We will also try to hack on tools such as the one that compares a council's street gazetteer with OSM. It's very much a hands on workshop style event (a "hacking" event as OSM folks like to call it)

See the UK local councils page for an idea of the sorts of tools we might hack on.

On Sunday 27th we will continue with any development work spilling over from Saturday, and maybe just do other core OpenStreetMap development work. The main event for government related work/discussions will be the Saturday.

Where: London City Hall.. here. Yes! That is this building by tower bridge. Bit of a step up from a our previous leaky-roofed venue!

We have a booking for "Committee room 2". Access to the building on both these days will be via the side door (reception will not be open)

When: 10a.m. to 6p.m. on both days. 26th 27th June (There will be no formal introduction presentation or anything like that, so you can actually turn up late, but we'll be trying to kick off at 10 )

shorter link to this page: http://bit.ly/osmgovworkshop2010