Heathrow is a village in Greater London, England at latitude 51°27′36.00″ North, longitude 0°27′00.00″ West. It is home to the biggest/busiest UK commercial airport. Heathrow Airport is commonly used as an example location when investigating quality of a map provider.

One thing we could add more detail with is internal POIs. Like any airport, the terminals (particularly the newer ones) are full of ghastly shopping malls. So far we haven't mapped many of the shops inside (Tag:shop=mall#Shops within a mall) . There's also toilets, telephones, etc. Positioning is a challenge of course. Probably more so than in normal shopping malls. Roof shapes of Heathrow airport won't offer many clues.

By March 2008 we had very good coverage of heathrow airport, and we took great pride in mapping out the arrival of the new Terminal 5 building and road connections before any other map providers.

We have some nice ancient images here which are of historical insterest. Very old maps from OpenStreetMap in August 2006! 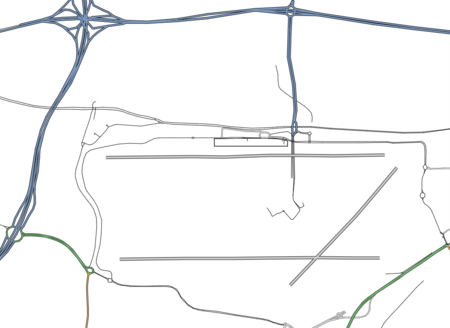 osmarender rendering of the map (This was the only way we could get a map back then. This pre-dates Mapnik and the Slippy Map) 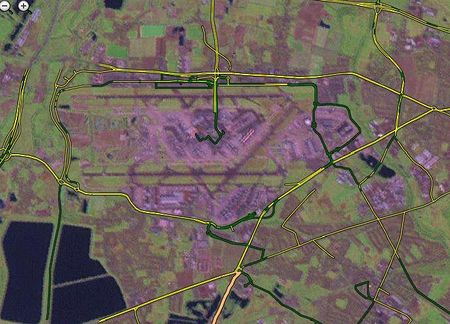 The old landsat overlay view of heathrow. Interestingly you can actually just about see the runways in fuzzy landsat
Retrieved from "https://wiki.openstreetmap.org/w/index.php?title=Heathrow&oldid=1318883"
Categories:
Hidden category: