This is a completed import of municipal building and address data for the City of Flagstaff, Arizona. This effort built on some data preparation and import steps previously used to successfully import buildings and addresses for the City of Redlands, California.

Data preparation and import work to be performed in February-March 2020, with the import performed incrementally over a period of 1-2 weeks. 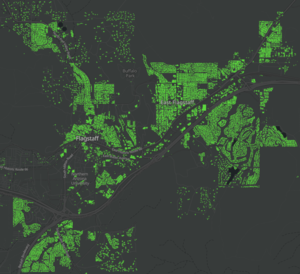 This map shows new buildings that were added for the City of Flagstaff, AZ area. 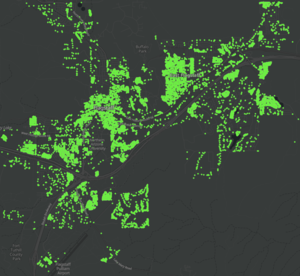 This map shows new address points that were added for the City of Flagstaff, AZ area.

Data was provided by the City of Flagstaff GIS Team, and to be available via their Open Data Portal.

Latest Building Footprints and Address Points, as of February 2020, have been processed and published as live feature layers and layer packages for download.

OSM ODbL Compliance: Yes, explicit permission to integrate data with OpenStreetMap given by GIS Team for the City.

For the building footprints, the features will be assigned tags based on values in the City data source attributes as summarized below. The Building Subuse attribute values (e.g. Apartment, College, Garage, Restaurant, etc.) will be mapped to the appropriate Building tag, to be finalized during data preparation.

For the address points, the features will be assigned tags as summarized below.

Existing building features in OSM will not be replaced. The plan is to perform the import in two steps. In the first step, new buildings that do not intersect existing buildings or other OSM data (e.g. water, roads) will be added. In the second step, new address points that are not in close proximity to existing address points (e.g. amenity features with addresses) will be added, to avoid duplication of the same address in multiple features.

This import will be done in sections (block groups) using ArcGIS Editor for OSM. Import will be tested on Development server first.

New dedicated import account(s) to be created and used for import, including the following.

Will set source = City of Flagstaff