The LicenseChange plugin works a little bit like JOSM's validator mode, only that it does not validate the correctness of objects, but whether or not all contributors of an object have agreed to the license change.

The LicenseChange plugin reads abbreviated history information (either for selected objects or, if none are selected, for all loaded objects) from a special server, the Quick History Service at http://wtfe.gryph.de/. That server keeps track of who edited an object, and who has agreed to the Contributor Terms, and sends that information back to JOSM. Potlatch2 uses the same server for its own license change support functionality.

Objects where all contributors have agreed to the license change will not be highlighted by the plugin. But when the creator of an object has not agreed, or when subsequent editors have not agreed, the object will be shown in red or orange.

A red markup means that the creator of the object has not agreed to the license change and therefore it is very likely that this object will have to be removed during the license change. There are cases however where this may not be so; recently there has been discussion on the mailing list about what happens when someone creates a node without tags and someone else later moves it; even if the creator does not agree to the new license, this might be a situation where the node can be kept.

Also, there are some kinds of edits that do not lead to any copyright, e.g. someone removing a "created_by" tag on a large scale. If such a mapper has not agreed to the new license, his action might still colour an object orange but since the edit is trivial, the node can be kept nonetheless.

Conversely, no markup does not always mean that the object is "safe"; for example, a way that uses unsafe nodes might look ok but would have to be removed because it is using unsafe nodes.

The LicenseChange plugin is meant to give you a quick overview about the license situation; when in doubt, always have a look at the detailed history of an object. 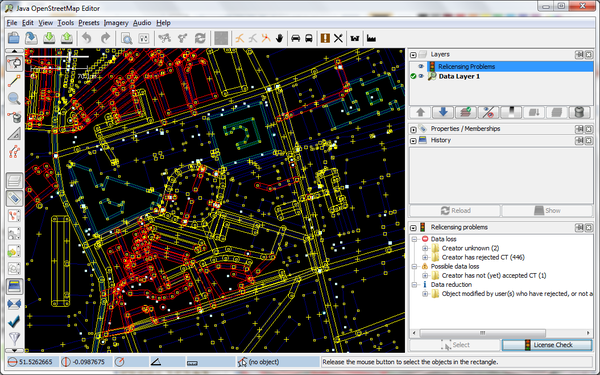