From OpenStreetMap Wiki
Jump to navigation Jump to search
Key:roof:direction - Other languages

roof:direction specifies the orientation of a roof shape specified with roof:shape=*. This tag describes the direction of the roof surface(s), not the roof ridge.

In contrast, with the simpler alternative roof:orientation=*, the ridge direction is described with along versus across related to the longer of two building edges. This detection is not suitable for pent roofs and square buildings, roof:direction must be used here. These two tags are alternatives, it is sufficient to use one of them. 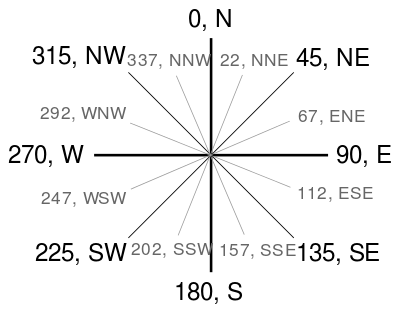 In the case of a pent roof (skillion) in the south-east orientation, the degrees are given

With an axisymmetric roof shape - such as a gable roof (gabled) - there are two possible values. Any one of these can be chosen (e.g. with a comparable building orientation also roof:direction=135).
A pyramidal roof (pyramidal) does not require a roof:direction capture.