User:JoeRichards ran an import of LINZ & NZOGPS and put the results on a dev server. The maps can be compared against live OSM data here.

The source code is visible in a pretty trac page here

The actual XML OSM files output by the script run are here:

This page is intended for listing problems and queries regarding the test import and preparing for the next run. 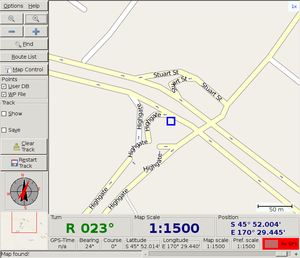 Roundabouts are apparently split. This is caused by roundabouts being tagged as junction=roundabout, but not highway=* 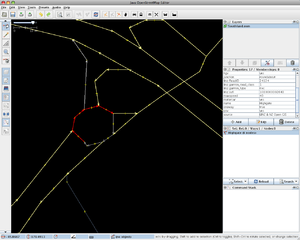 Roundabouts are present, just split up and lacking highway=* tags

Right, they look like a donut with two bits taken out. At least the ones I've spotted so far. 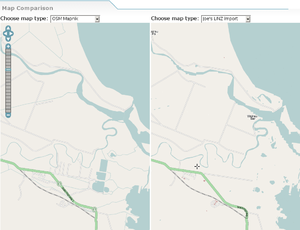 Apparently cut down in that dataset in order to save space for more roady things.

-- Just grab the original data from the LINZ topo dataset river_poly layer. Koordinates.com have these available for download as a shapefile. --HB 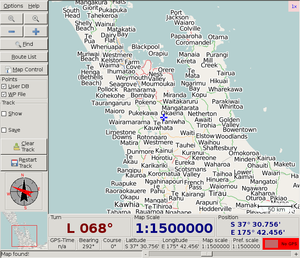 At the moment the garmin codes (which roughly specify a region/city/town/locality etc) are translated into osm tags, but they might be at the right scale (e.g. a village might be tagged as a hamlet). This might mean that we see too many (I think!) or too few localities at a particular zoom level.

Problem The NZOGPS data uses common (and not-so-common) abbreviations such as St for Street. Openstreetmap doesn't use abbreviations. So we need to retranslate these back to their unabbreviated forms, without doing it in the wrong places, e.g. St Heliers is not Street Heliers.

A list of abbrevations and their full version (thanks to Mike Oberdries) is here: http://docs.google.com/Doc?docid=0AT8ugvNNx8UZZHh3OHZ0NV83Mmdxc3pwdmZ4&hl=en

Double-check. Is it just a particular area? Can we get around this during our manual merge process?

-- maybe these have been cut down to save space in the .mp file, same the river_poly's were? or perhaps they are just crude representations for the topo maps -- HB
http://koordinates.com/layers/global/oceania/new-zealand/?q=building

A matrix of OSM icons can be found here. See transport → track (no listed OSM Condition)

-- Yes, the LINZ topo4 shapefiles's height_pnt.dbf includes a single-precision floating point column called "Elevation" containing the peak height (ridges too). You can also get the trig station database from LINZ as well as a different dataset. --HB
see http://koordinates.com/layers/global/oceania/new-zealand/?q=height

Also need to check this:

Many LINZ layers are available for download from Koordinates.com.

A comprehensive place name database can be downloaded from http://www.geonames.org. Geonames data is largely an import (http://forum.geonames.org/gforum/posts/list/26.page) of the LINZ placename data, from several years ago - better to go to the source http://www.linz.govt.nz/placenames/find-names/nz-gazetteer-official-names/index.aspx . In my opinion that data is of questionable value, odd mix of data, coords read from paper maps... --Zenbu

We have started mapping the LINZ layers to OSM types. Each layer needs to be looked at individually to see what tags we should use and what manual work will need to be done to clean things up once imported. We are using the Chatham Island's as a test bed as this has very little OSM data already so we won't be overwriting any existing work. See the List of LINZ layers and notes for details of the progress. I will update this section with notes on the mapping process once i have this documented - Barnaclebarnes

Which was in turn based on:

The same is true for road surface type and number of lanes, etc.