Leuven (French Louvain, German Löwen) is the capital of the province of Flemish Brabant in Flanders, Belgium, European Union. The actual municipality comprises the historical city of Leuven and the adjacent villages of Heverlee, Kessel-Lo, a part of Korbeek-Lo, Wilsele and Wijgmaal. On the 1st of January, 2006 Leuven had a total population of 90,706 (44,739 males and 45,967 females). The total area amounts to 56.63 km², corresponding with a population density of 1,601.73 inhabitants per km². Source Wikipedia

There are loads of CCTV camera's around the city center, take a look around the Oude Markt for example. I'm trying to add them as I notice yet another one, the results are rendered on the Carte des caméras de surveillance en France. Camera's are nodes with a man_made=surveillance key. Optionally you can add an surveillance=indoor or surveillance=outdoor to indicate a camera outside (like the Oude Markt) or inside (like a store) a building. You can also add a operator=* key to describe to which organizations the images belong to. For the cameras on the Oude Markt I'm using operator=Politie Leuven for now.

The key lit=* indicates the presence of lighting (on a street but applicable to many other types as well, a square for example). I started adding this key to the highways around Leuven and some of the streets in the city center but there still is a lot of work to be done.

There is a very detailed map which is copyrighted by the city of Leuven. We could ask permission to use these maps as a source to add houses in the city center?

Uploaded GPX data so far (last version dates from 26 November 2006). These are all the GPS points mapped and uploaded to OSM, most of them are tagged as you can see above. 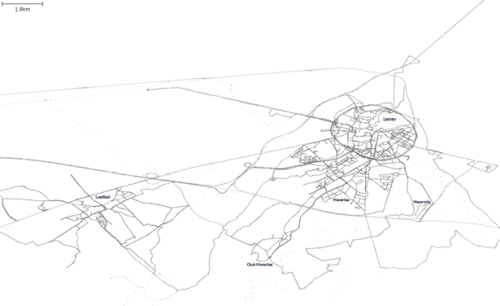