Meteor project in Tanzania - Other languages

Modeling Exposure Through Earth Observation Routines (METEOR), is a three-year project funded by the UK Space Agency to develop an innovative application of Earth Observation (EO) technologies that will improve the understanding of disaster exposure. The project focuses on two pilot countries━Nepal and Tanzania. METEOR involves eight consortium organizations from across four continents. Their expertise spans from humanitarian aid to remote sensing and disaster risk reduction to policy advice.

Under this project, Humanitarian OpenStreetMap Team (HOT)--with Tanzanian local partner OpenMap Development Tanzania (OMDTZ)━was tasked to execute the project in Tanzania. During the period of December 2018 through May 2019, HOT and OMDTZ digitized a total of 10,955 buildings on homogenous zones using the Tasking Manager to create data sets aiming to build local and global resilience through innovation in order to better identify risk and enable more effective decision-making  and deliver a country-wide openly-available exposure data for the 48 least developed Official Development Assistance (ODA) countries.

The project began from 22nd October 2018 to 30th April 2019. Several activities were conducted during this timeline including: remote mapping of buildings, building attribute data collection, field data validation, verification and upload of data to the OpenStreetMap (OSM) platform.

The digitized buildings were subsequently used to conduct building exposure surveys of Dar es Salaam and the neighboring region of Pwani with seven selected homogenous zones categorized as:

The zones mentioned above fall within 35 wards of Dar es Salaam as shown on the map below; 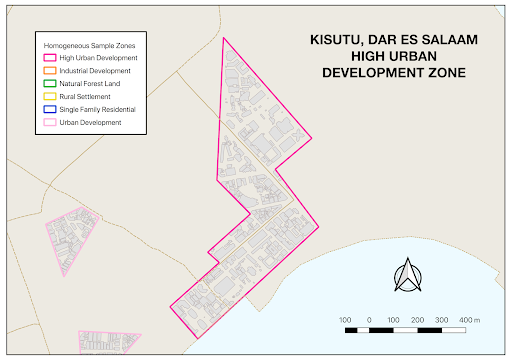 Remote mapping also referred to as armchair mapping, is the process of modifying and/or adding in new data to areas from a distance. It usually involves the use of a software program, tracing information using satellite imagery, and uploading the results so they can form part of a map data. Using imagery to draw points, lines and shapes on the ground can also be referred to as building digitization.

As a pre-field activity, building datasets is crucial as it supports the data collection process once field survey is to be conducted. Although most parts of Dar es Salaam were already digitized using either Bing or DigitalGlobe aerial imageries, there was a need to update and re-digitize most of the misaligned buildings using high-resolution imagery. This is an important process as it determines the level of quality of data to be collected in the field.

This section provides in-depth information on different mapping activities conducted in the duration of the METEOR project—and while on that, the subsections dive deep into more details of mapping approach, tools used for mapping, quality assurance, challenges faced, etc.

This subsection dives deep into the mapping methodology and how user-friendly tools were used to directly make changes to OpenStreetMap, the free collaborative map of the world. This is as follows:

The HOT Tasking Manager is an OSM tool to manage, create and open tasks to help mappers add features easily. The HOT Tasking Manager plays a vital role to help monitor mappers contributing to OSM by gridding out areas for mapping. This allows a user to work on one task at a time and reduces the chances of creating data conflicts. 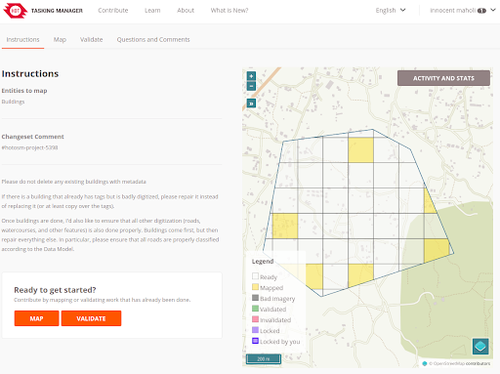 A snapshot of a task on HOT tasking manager showing (https://tasks.hotosm.org/project/5398)

The team used Java OpenStreetMap Editor (JOSM) to trace buildings and for initial quality checks before uploading data on OSM. Tracing buildings was easier because a high 10 cm COWI resolution imagery provided by the Ministry of Lands, Housing and Human Settlements was used. Throughout this activity, the mapping team was able to trace and fix existing errors of 9038 buildings in all zones. 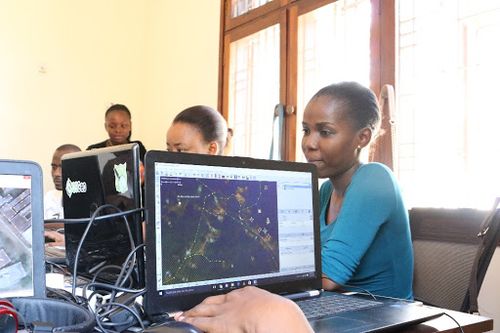 The checkboxes were then marked as validated in the Tasking Manager. Once validation by each individual was done, another validation was done to finalise the whole layer. This involved exporting the GeoJSON file in tasking manager and importing it into JOSM where one can download the whole area and work on it. This was important for data quality, especially for buildings that were found in between two tasking boxes. Sometimes you may find that they are left as they are i.e. not mapped in order to avoid conflicts between boxes therefore this was done by mapping supervisors only.

After the data review process, a few experts from the mapping team were assigned to fix the detected errors in QGIS. All 37 buildings that were found to have multipolygony issues were then re-digitized and tagged correctly using JOSM Editor. 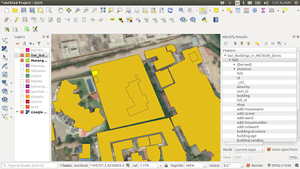 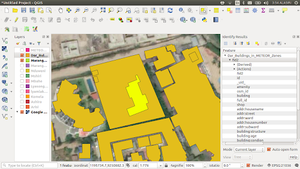 Quality Assurance (Before and After digitization) 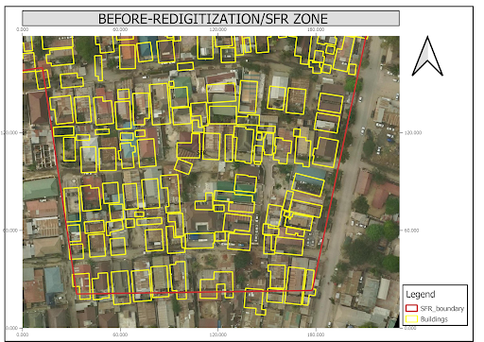 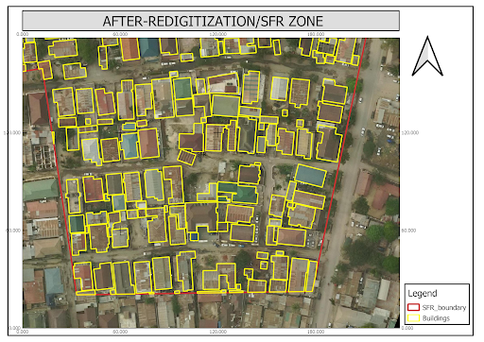 Due to the nature of digitization, there is always a need for a good internet connection when using the Tasking Manager and uploading data to the OpenStreetMap platform. This was somehow challenging because even though the team members were provided with scratch cards to top up their phones and tether their laptops the internet was still down and overloaded

This refers to site visiting for ground truthing and collection of relevant data. Field mapping includes adding all necessary tags as stipulated in the data model and making sure the attributes are tagged correctly to avoid any inconveniences during validation and analysis. It may include observation, direct interviews with community members and/or residents etc.

Observation process was the main method used in data collection due to the nature of the data needed. Some specific questions that cannot be answered by observation were asked to the residents, for example the number of people living in the household.

The digitized building footprints were used to do randomization of the buildings so as to identify areas for field surveys in later stages. Randomization was done to achieve the following:

The data model used for this project was adopted from Kathmandu METEOR project and the attributes were built upon GED4ALL. Localization of the data model was done according to the nature of buildings in Tanzania whereas some OSM tags that do not apply in Tanzania were removed and others added with reference to the need.

In order to localize the data, the questionnaire form was modified to concur with the buildings available in Tanzania. The forms field in the field after data collection are uploaded to the OMK server online. ODK and OMK forms used in data collection are found here.

This refers to the uniqueness of the project when someone wants to filter the data from OSM, therefore source tag was added to each building during data collection in order to differentiate the buildings that were mapped during the METEOR project.

All data uploaded through field survey was applied with a ‘METEOR Dar es Salaam Field Survey 2019’ as a changeset comment and a source tag in order to simplify the filtering of data.

Summary of the Data Model 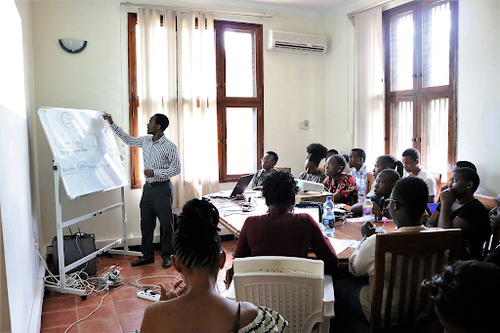 Map Campaigner━a monitoring tool created to manage field activities to check and review the status of the ongoing and completed field mapping campaigns. Since the zones were scattered, the campaigns were created following priority of the zones. The following are some of the map campaigns created to check the completeness of attributes collected in the field after the data was uploaded to OSM:

Map campaigns created to check the completeness of attributes collected in the field after the data was uploaded to OSM: 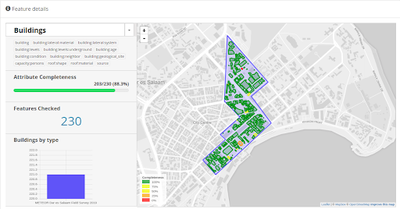 The map campaign showing attribute completeness in the zone

An example of map campaign in high urban development zone

At the end of the field work, a total of 2951 buildings were surveyed. Some of these buildings had pre-existing attribute information following the tags identified from the data model such as building, building:age, building:levels, and building:material while other tags were not present at all.

The table below shows how the information uploaded through this project has added the tags as outlined in the data model:

Note: No work has been done on natural forest zone--There were no buildings

After data collection, the data was then cleaned by using JOSM and uploaded onto OpenStreetMap. We were able to clean and upload 2951 building polygons on OSM using the changeset comment and source tag source: METEOR Dar es Salaam Field Survey 2019. We calculated the number of buildings in each zone and found out that some zones have more or less buildings than others.

After data collection, we recruited another team for data validation from Ardhi University━4th year students majoring in  Bachelor of Science in Building Economics. These validators were specifically identified by the hired engineer who trained our team before fieldwork.

The main aim was re-checking the tagging of buildings and it was only done on the priority areas i.e. high urban, urban and industrial zones. These are zones with high rising buildings and some of them with complicated structure and materials. We chose to validate only some zones since they contain high rise buildings that need more time to describe the features. The validation was done in a timely fashion. Validators did the following: 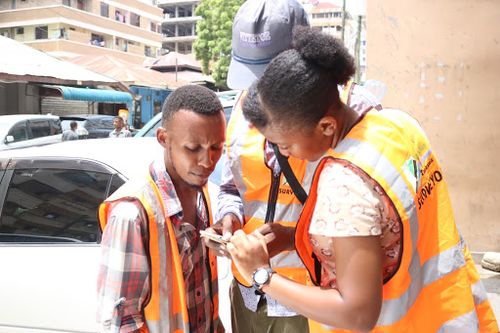 A validator from Ardhi explaining some details to the team: Photo--HOT-Tanzania

For us, data collection is completed in the prioritized zones. We are looking forward to seeing whether this has to be done to other remaining parts in Dar es Salaam and/or other regions. This will depend on the demand of the model that will be developed.