This page describes the directed editing activities by Kathmandu Living Labs (KLL). KLL is working together with the Humanitarian OpenStreetMap Team (HOT) on the Modelling Exposure through Earth Observation Routines (METEOR) project. HOT is working together with the British Geological Survey, ImageCat, and the Global Earthquake Model on a UK Space Agency International Partnership Programme, focused on developing innovative applications of earth observation (EO) technologies to improve understanding of exposure to help minimise risks from natural hazards. KLL, is directly working with HOT on the digitization and then subsequent building exposure survey of Kathmandu Valley.

Kathmandu Living Labs (KLL), is a civic tech company that specializes in Open Mapping and creation of digital infrastructure that brings government, nonprofits and businesses together to leverage the latest technological tools to provide everyday citizens with better services. KLL has been working to improve open data of Nepal through the integration and use of OpenStreetMap (OSM) in all its projects.

The escalating impacts of natural hazards are caused mostly by increasing exposure of populations and assets. It is estimated that the world will see the construction of 1 billion new dwellings by 2050 and this growth may lead to rapid increase in risk.

The country-wide datasets developed by ImageCat will be tested for their suitability of purpose against OSM data surveyed on the ground. One such survey will be conducted in Kathmandu and is being led by KLL. This work will require the digitization of building footprints and a second phase will require the collection of building attributes from a sample of households in Kathmandu Valley.

The project is limited to Kathmandu Valley. Seven homogeneous zones were created by ImageCat. For specific areas within the valley see https://tasks.hotosm.org/project/5432 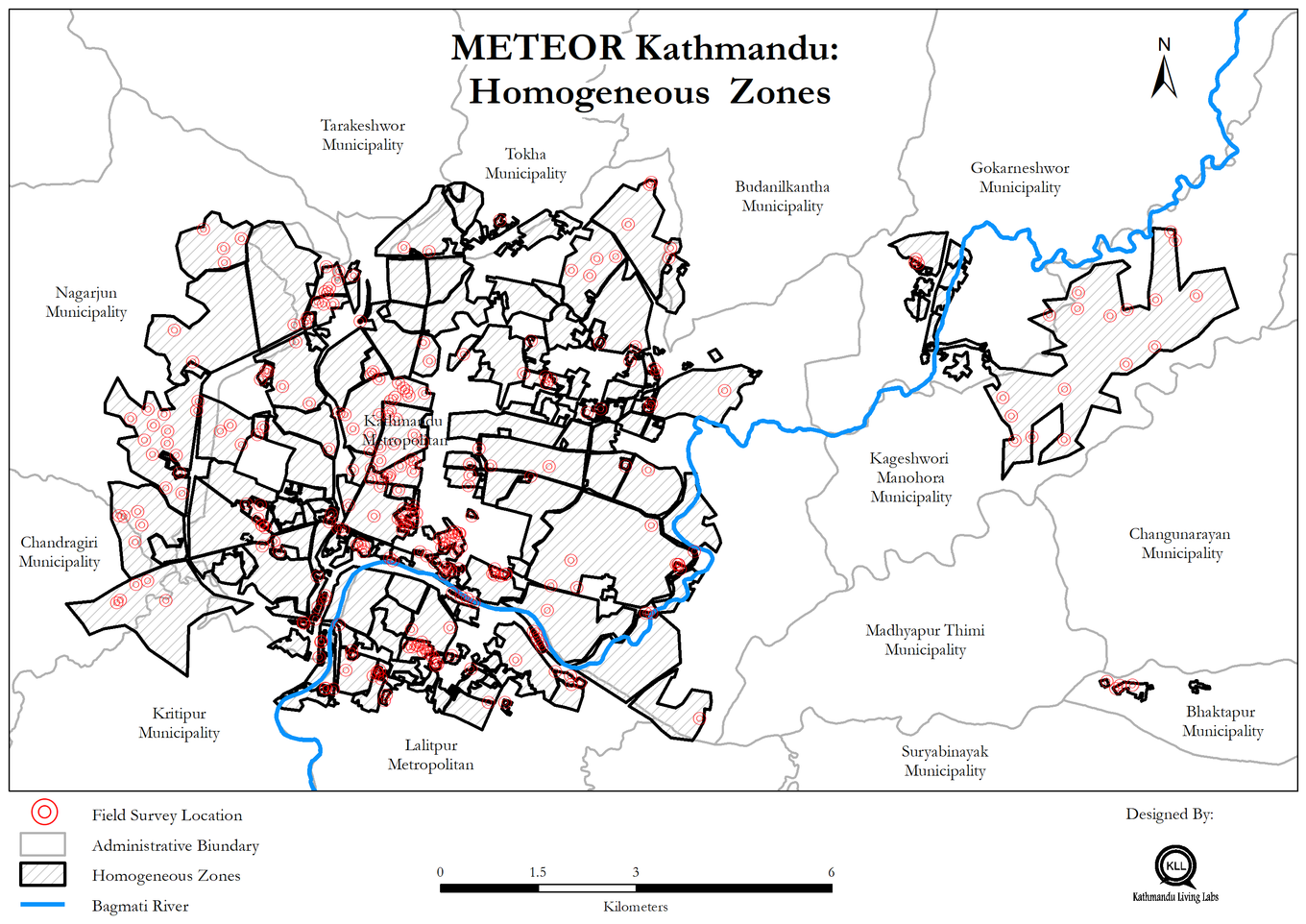 The outcome of the digitization process in before and after map form can be viewed through this link: https://kathmandulivinglabs.github.io/ktm-buildings-before-after/

Recruitment of surveyors began from the month of January. For this project surveyors were primarily civil engineering students with a sound understanding of building structures. A local Engineering consultancy firm, was brought on-board by Kathmandu Living Labs to identify and recruit these surveyors. Group interviews were conducted on January 13 and 14 to ensure a match in terms of technical knowhow and motivation. After the recruitment process, 12 surveyors were selected for the project.

Training of surveyors took place on January 16 and 17 at Kathmandu Living Labs Office. A training session was conducted by two senior civil engineers and provided details on building structures, materials commonly used in Nepal and challenges of visual inspection of buildings. Second day of the training session focused on the use of data collection tool, OpenMapKit (OMK) and the process of collecting and uploading the collected data. For this the surveyors were also taken out to the field where they collected real world data. This data was subsequently evaluated and feedback were given to the surveyors. Before surveyors were sent out to the field a map with all the randomized sample points was created. From local understanding of Kathmandu and its roads six clusters were created. The clusters were then drawn on GIS. We then counted how many points each cluster contained and adjusted the clusters so that all six clusters contained between 45-55 points. Based on these clusters six groups of two surveyors each was created. Groups that had longer travel times were assigned fewer points. Maps of the field areas were created and given to each group. The maps ensure that that there are no overlapping field areas and thus prevents duplication of collected data. Throughout the data collection period a weekly meeting was held. These in person meetings were used as a place for surveyors to discuss the challenges they faced, ask specific technical questions to experts, learn more about OSM/OMK and get feedback on the quality of the data being collected. Desk validation by our experts were conducted two times. Once when 50% of the data was collected and second time when 90% of the data was collected. To do this .csv file of all survey groups were downloaded. These were then divided into six groups based on the individual name/device id through which the data was uploaded.

Once sorted into groups each tenth row was validated by experts based on the images gathered by the surveyors. This is done so that 10% of all data brought in is validated through desk research.

Spot checking occurred by taking the 10% data that had been validated through desk research out of which latitude and longitude of every tenth row was noted. These locations were then visited to ensure that data on the ground matched the images and data collected by field surveyors.

For all data uploaded through the field survey a source tag ‘METEOR Kathmandu Field Survey 2019’ has been applied. 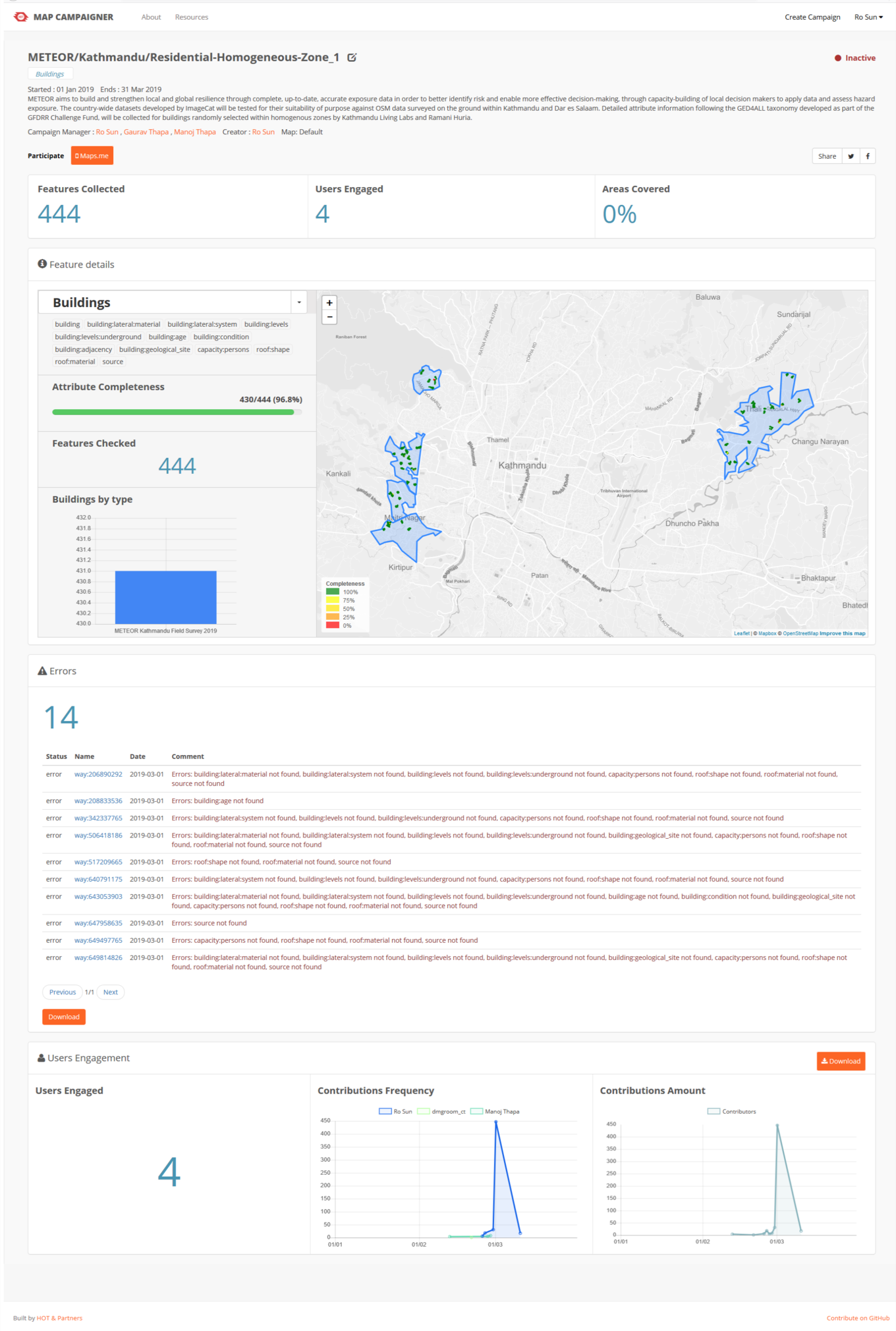 Further details on KLL's approach to field data collection can be found here.

At the end of the field work a total of 2,701 buildings were surveyed. Some of these buildings had pre-existing attribute information following the tags identified from the data model such as building, building:adjacency, building:levels, roof:material and roof:shape, while the other tags were not present at all. The below table shows how the information uploaded through this project has added the tags outlined in the data model to this pre-existing information.