Maidstone micro mapping party was a past event held on 8th/9th Nov 2008.

Maidstone is the largest town(?) in the south east England with poor mapping coverage. It is also the administrative centre of Kent. If many people are interested, the urban areas of Leybourne, West Malling and Snodland need doing too. There is no shortage of unmapped area!

It is being "organised" by TimSC. 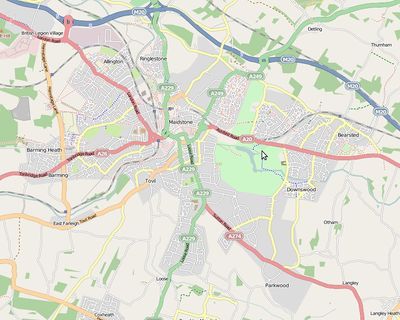 The group should be recognizable by the piles of maps and GPS receivers. Also, my profile now has a photo.

Yumm Yumm's Deli Cafe, 2 Rose Lane, Maidstone Location. I notice they only open at 10am so I changed the meet time to 10:30.

I seem to remember parking in Maidstone is a pain. Any local knowledge anyone?

From London, get the train from Victoria. 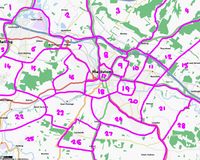 5 Countryside/Small Town (West Malling) TomS I did most of this (as far west as Offham) with the exception of Leybourne Grange which I'll survey next time I'm in the area. Data mostly in now.

10 Urban Gregoryw - Surveyed most of area (Missed a bit on the Northern end of the slice). Inputting complete.

11 Urban Gregoryw - Surveyed whole area with the exception of the full length of some bridleways (Too muddy). Inputting complete.

12 Countryside/Villages Gregoryw - Surveyed a small bit of this area, though not originally planned.

13 Countryside/Villages Gregoryw - Surveyed a small bit of this area, though not originally planned.

20 Urban Gregoryw - Didn't manage to get started here. I'll come back and survey this another time.

21 Countryside/Villages Gregoryw - Didn't manage to get started here. I'll come back and survey this another time.

23 Countryside/Villages --pray4mojo (If I can make it!)