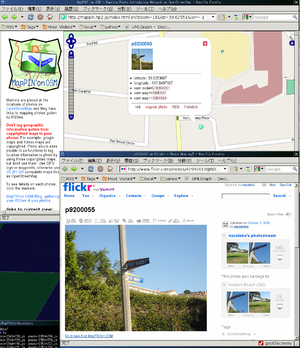 MapPIN'on OSM(http://mappin.hp2.jp/ ) is "Mapping Photo Introducing Network on OpenStreetMap". The website provides index of locations of geotagged photos and shows them on OpenStreetMap. This web server itself doesn't hold any photos. Those photos shown on the map are published somewhere in Internet and they are just linked to "MapPIN'on OSM" by RSSes which the photo's authors provided. So to speak, MapPIN'on OSM is a kind of RSS reader. The real aim of this projects is exciting remote mapping. The site owner is one of OSM contributors, Nazotoko. Now the state is beta released (test and correction state). The data itself is stable. Anyone can join it.

To map something, we need to gather information of where it is and what it is at the same time. (see Mapping techniques.) Aerial photos and GPS tracks give us where it is, however, those are hard to show what for the other people. Ground surveyors write notes on their notepad or take photos to recode the what they are. Then when they get back home, they start to link the notes and photos with the GPS logs and they can start to draw map according to those material.

Then, here is a question. Those linked notes and photos have got what and where at the same time. If someone give us such great materials, can we start to draw map without surveying there? The answer is YES! and many people who are not contributors of OSM have such great materials. Those are called as "geotagged photos". MapPIN'on OSM project is correcting a lot of geotagged photos, which are usable for mapping, (I call them "Mapping photos") and introducing to OpenStreetMap contributors. 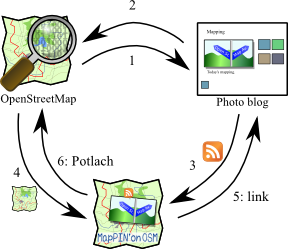 Some of OSM mappers already know the geotagged photos are powerful sources. So they may geotag their photos. Some GPS users have already geotagged their photos. They upload such photos to somewhere in internet. Such sites are called as web photo albums or photo blogs.

If this connection were strong, MapPIN'on OSM would not be needed. Unfortunately, those photo blog site doesn't give any information to OSM, actively. They have searching functions with location though, those searching function just answer a few photos of thousands of photos. The worst thing is that their map is copyrighted. We cannot distinguish the geotagged point information are come from GPS or copyrighted map, just using the photo blog sites.

Then, MapPIN'on OSM is needed to select the copy-licensed geotagged photos. First of all, photo owners must register their photo blog site by a URL of RSS of their site. MapPIN'on OSM never collect photos information without owners' agreement. Next, a background server download the RSSes and the photos listed on the RSSes from their blog sites. From those files, it makes a list of locations, links, and possibilities of copyrighted geotags for each photos. How to distinguish the possibility is explained later.

Photo markers are coloured by the possibility of copyrighted geotags. Any coloured markers must have latitude, longitude and link to the original photo blog. Link-backing is a social rule. Legally, RSSes are usually licensed by Creative Commons Attribution somewhat, too.

If the colour of a marker is blue or yellow, you can use it in Potlatch or JOSM. "map edit" menu on the top of the page leads you to start to edit OSM around there.

Browsing it is a fast way to learn it. The map uses OpenLayers which is the same with Slippy Map. You may be familiar with zooming and panning the map to see somewhere you want. When the zoom level is over 10, this map try to read a photo marker tile at the centre. Each photo marker tiles is a 2x2 minute square. If there are some photos in the area, their locations are shown as markers. The meaning of those colours are explained later.

Some of you will realize that the interface is very similar to OpenStreetBugs. Yes, this site's interface part is derived from OpenStreetBugs and the controls are not so changed.

When you hover the mouse pointer on a marker, a tip pops up on it. The tip shows a thumbnail, location information, and some links related with the original photos. The links means as the follows:

When you click on somewhere not placed any markers, a yellow marker comes and shows "Here is:" popup. The popup shows location information of the point that you clicked. The "mappin:at=*"[1] shown on the popup is a short code for the location and it indicates the information comes form MapPIN'on OSM. If you tag it to one of your photo on your photo blog, MapPIN'on OSM decodes the information and places the photo marker there.

Icons' colour means the copyright safeties of the location information as shown in the following table.

Editing OSM with the photo

When the marker colour is blue, or yellow but you are sure that it is copyright safe, you can edit OpenStreetMap with it. You can see a menu item "edit map" on the top of the map. The submenu leads you to start to edit around there. MapPIN'on OSM supports Potlatch by Photo KML and JOSM by a plugin. 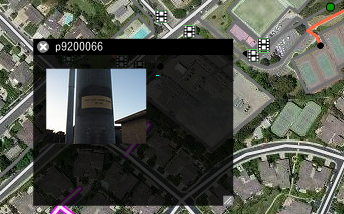 If you use Potlatch, set http://mappin.hp2.jp/kml.php to a box of photo KML. See the detail is a blog article "MapPIN'on Potlatch". [2] After setting it, click camera icon at the bottom of Potlatch panel. The photo markers are loaded and film icons are appears. The KML provides only blue markers.

If you use JOSM, install MapPIN'on OSM plugin first.

Before you start to edit, you should get which direction the camera faced to when the photo was taken. If your camera has a compass and can tag GPSImgDirection, MapPIN'on OSM shows the direction and area. [3] Unfortunately, such functionable cameras are very rare. Ordinarily, some kind of landmark may be taken into photo, for example, a straight road, a high building, a lighthouse, a mountain, a valley or a coastline. Find the landmark on OSM. MapPIN'on OSM also provide the function to show contour lines (this is public domain source), so you can also find a mountain from it. From the landmark, you may get directions and scale, so you can map anything shown in the photo. Even if you get any landmarks, if you can see some shadow of the Sun, you can get the direction by calculating from longitude and the photo's taken time, which is recoded on EXIF tag.

Before finishing editing, Do NOT forget to tag source=* to mapped features. The linking URL should be the URL shown as "link" in the popuped tip. This tagging is very important for 2 reasons.

This is not required but socially better to comment "Thank you" to the original photo author's blog, when you use it to draw a map feature. Here is a example in English.

How to provide your photos

In order to make your photos to be placed on MapPIN'on OSM, you need to add location information to your photos, there are 3 ways.

Your photo blog may provide auto-generated RSSes. Find the URL of the RSS and register it to Registration form.

Picasa is a software provided by google. It usually use google map and it doesn't allow us to edit EXIF GPS tag by direct input of latitudes and longitudes. Thus, MapPIN'on OSM deals Picasa's editing EXIFes as copyrighted information.

However, I have found another case that Picasa edits EXIFes. It happens when you rotate your photo in picasaweb, and it has fatal bug, reducing precision of coordinates of original EXIF GPS tag. It is a known bug, but google has not fixed: [1]

Here is a case of my photo.

See well at Latitude and Longitude. Obviously, it cuts values less than minute unit. Strongly, I must say that Don't rotate your photo in picasaweb. Because of this fatal bug, MapPIN'on OSM never trusts EXIF when "Picasa" is found in EXIF.

Translate this xml file and contact nazotoko to integrate it.

Link to MapPIN'on OSM blog (for news and discussion)