A Copyright Easter Egg, in terms of mapping, is a feature that is drawn in a distinctive way in order to help identify its original author. It may be a nonexistent, or slightly or heavily distorted, map feature, or its name may be wrongly or unusually spelt.

There's a fine line between easter eggs and errata. For example Google Maps/Tele Atlas has Patrick's Hill in Cork where Camden Quay should be. This is probably just Google making a mistake. They have been known to get London tube stations on the wrong side of the river. Clearly they don't display major errors like this deliberately (it makes their map unusable in the area!). We have a Catalog of Errors listing more examples.

Of course errors may also serve as a copyright trap in a legal dispute over copyright, but "copyright easter egg" refers to false features or inaccuracies deliberately introduced for the purpose of laying a copyright trap.

Errors can be introduced for all kinds of reasons, and may look a lot like copyright easter eggs. A good example of how this can happen, is "paper street" errors. A highway developer submits a plan to the government, but never actually builds all the streets. Many local maps will include these, since mapmakers often produce maps by referring to the plans. TIGER is full of these. Again this is not a deliberate copyright easter egg by the map makers, though it may look a lot like one.

OSM's view of the Topic

Fake street features are fairly hard to find, and we really have no idea how many there are. Fake streets, purpose mis-spellings and phantom churches are all thought to exist. Accidental errors and minor inaccuracies could also serve as copyright traps. OpenStreetMap asks you not to reference maps when entering data. This is partly to avoid such copyright traps, but also because we genuinely don't want to copy information from these sources. Organisations like the UK's Ordnance Survey have placed their maps under copyright. A campaign exists to change this ('Free Our Data') but here at OpenStreetMap we are working around the problem by building an open-licensed free and accurate geodata from scratch. The project is not an exercise in copying maps while trying to avoid copyright traps. We create maps without copying at all! That is the challenge we have set for ourselves.

Does OSM have copyright easter eggs? Although some OSMers have deliberately added errors to the OSM data as well (see posting on legal-talk by User:80n), this is strictly discouraged and contrary to OSM policy. It's also very unnecessary. Even if we seek to represent reality perfectly, that will never be the reality of map data. With OpenStreetMap there's a very unique and distinct fingerprint evident in the data coverage and details included, and yes, in the errors made. For example in 2012 the OpenStreetMap foundation could issue a statement with absolute confidence that Apple had used our maps (without crediting us) based on very evident copying, and without the need for introduced errors. 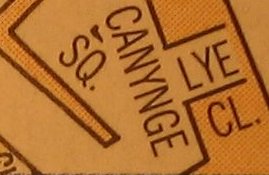 To the right is a tiny scan from an A–Z map of central Bristol. Only if you go and wander around Canynge Square in Bristol you see some nice houses (in the photo below the map) where that Close should be. 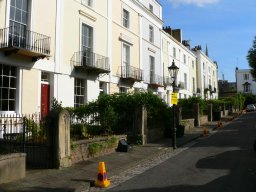 Lye Close isn't in the index either. Weird, huh? Well, not really. It’s an Easter egg, a surprise street (sometimes known as a "trap street") inserted so that if you attempt to copy the map then the copyright holder can prove you copied it. Otherwise, why would you have the nonsense street in your map if you didn’t get it from them? 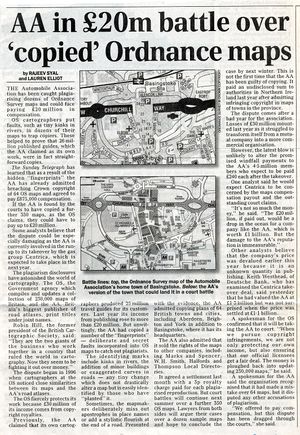 The AA copied some of the faked features on OS maps (The Telegraph, 8 August 1999) (link broken)

Ordnance Survey Maps sued the Automobile Association for copying their maps and diffusing the results to individuals as well as to third party mappers. Some 26 maps from AA were proven in court to be more or less direct copies of OS maps, or to incorporate data from OS maps. The AA was fined almost million pounds for infringement of copyright. Subsequently, the AA agreed to an out-of-court settlement of £20 million as compensation for other instances of copyright infringement. Compared to this sum, the AA has an annual cash flow of about £30 million.

There are also cases where the street signs are incorrect, but the maps are correct. For instance, the B550from Highgate in London to Whetstone (according to official sources at the Department for Transport, and according to OS, Bartholomew, Tele Atlas and Mapquest Maps). There are road signs at the Colney Hatch intersection on the A406 North Circular Road that shows it as the B550 in one direction and B505 in another.

A stretch of road in northern New Jersey is known and mapped as New Jersey Route 24 along County Routes 517, 513, and 510, although a freeway was built with that designation between I-78 and I-287, and in 1993 the old Route 24 ceased to exist, although resident resistance has kept the old Route 24 signs standing since they know the road as such.

More anachronisms are found in Port Norris, New Jersey, where Strawberry Avenue is marked as County Route 680, High Street is CR 631 and Ogden Avenue is CR 632. These designations were removed in the late 1980s when the oyster industry collapsed, but the signs remain and the roads are mapped as such. An error between the TIGER imports, Tele Atlas and Navteq is the designation of County Routes 649 and 633 as County Routes 15 and 33 (and CR 728 as 33B); these were designations set forth by Cumberland County until standardisation under the current county route system. CrystalWalrein 02:46, 20 October 2008 (UTC)

Other types of watermarking

Beyond introducing blatantly false information, other tricks are employed by cartographers to protect their work from copying.

A class of Easter Eggs can be implemented by digital map providers who do not want their raw map data (vectors) copied. The lower bits of the geographic coordinates are mangled in some systematic way so that it would not be obvious to a user of the map, but could be used in a Copyright trial to show that the data had been copied.

For instance, if all the coordinates had a remainder of 3 when divided by seven, or were all displaced from their real coordinates by some small but real offset. So don't use digital map coordinates from proprietary sources even if you were to compare every intersection and shape point on the map!

Vertices trick/mark. There used to be a trick for marking cartography using Morse code, spread across the vectors defining geometry of features. Some companies would place hidden words encoded along the edge of a feature represented by regular length segments representing dots and dashes.

Another rumoured trick is use the seemingly random spacing of tree symbols in a forest area. Rather than placing them completely randomly, the spacing can be adjusted in some coded manner.